When crafting a statement in a crisis moment, you can use research to answer three questions: How are people reacting to the crisis moment? Are enough people aware of the crisis that it merits response? What is the right thing to say to mitigate the moment?

How are people reacting to the crisis moment?

In the case of Andrew Cuomo, a released photo was the third instance (and first photographed instance) of sexual harassment allegations. It is helpful to know quickly whether this photo should cause your communications team concern. In this case, the short answer is yes. All respondents were asked to click on areas considered disturbing in the picture below. In the heatmap, the woman’s face was considered troubling by 80% of the national sample, and Cuomo’s face was clicked by 30% of respondents.

Okay, so the photo is widely seen as problematic. After showing the heatmap, we pose a follow-up question to ask people what their main takeaway is. Here are people’s answers: 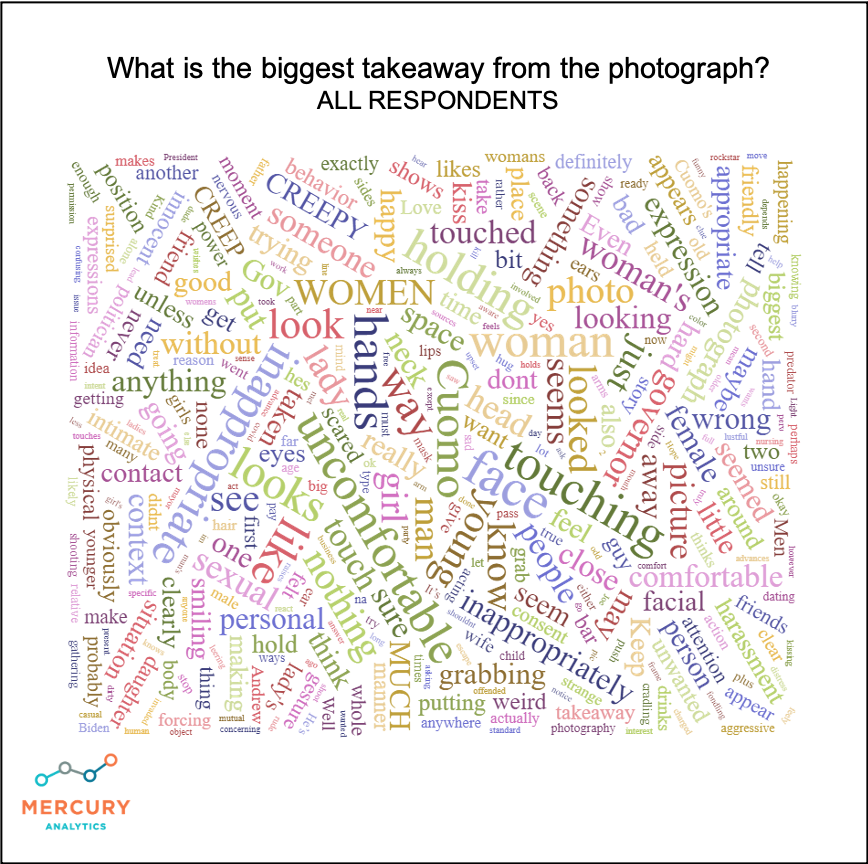 But are people aware of what’s going on generally? Or will commenting on it add more fuel to the fire?

Are enough people aware of the crisis that it merits response?

The sexual harassment claims against Andrew Cuomo are by far the most recognizable reasons for him being in the news. 80% of all respondents know about the sexual harassment accusations, compared to 56% who are aware of the accusations about underreported deaths in nursing homes. This crisis has definitely reached the awareness point where it merits a response.

What is the right thing to say to mitigate the moment? Test it!

If Andrew Cuomo’s statement had been tested before release, there would have been good reason to delete the second paragraph, which all respondents (Democrats, Republicans, Independents, Men, Women) found negative.

Using Mercury’s text highlighting tool, respondents were asked to review Cuomo’s 2/28 statement addressing the accusations. Two parts of the statement stood out among all groups. 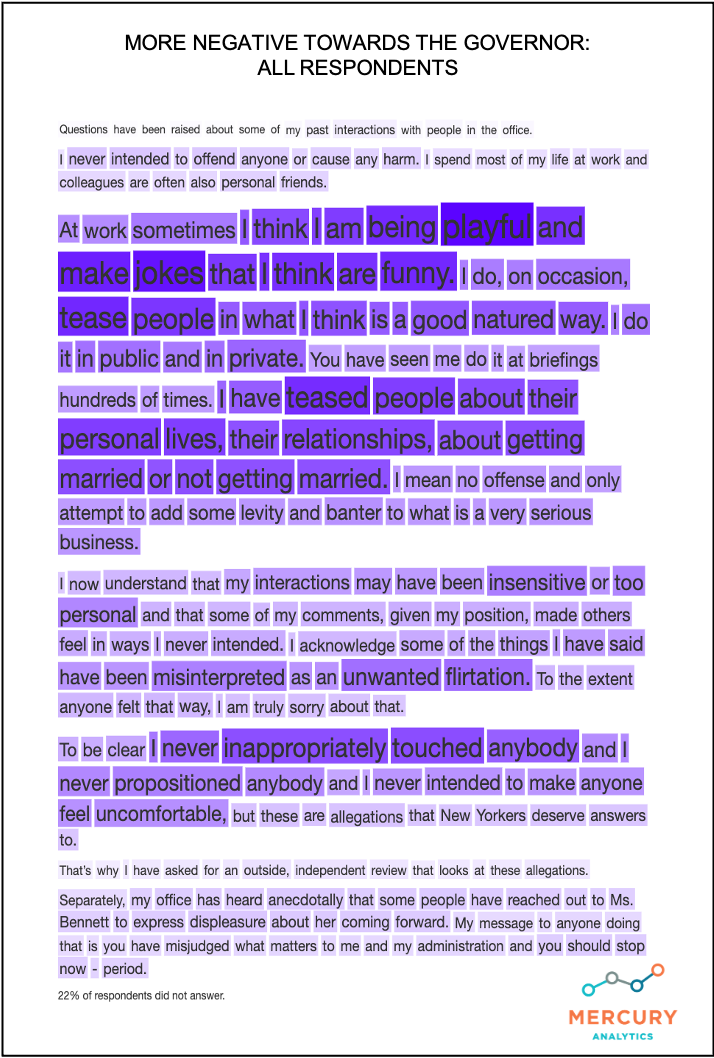 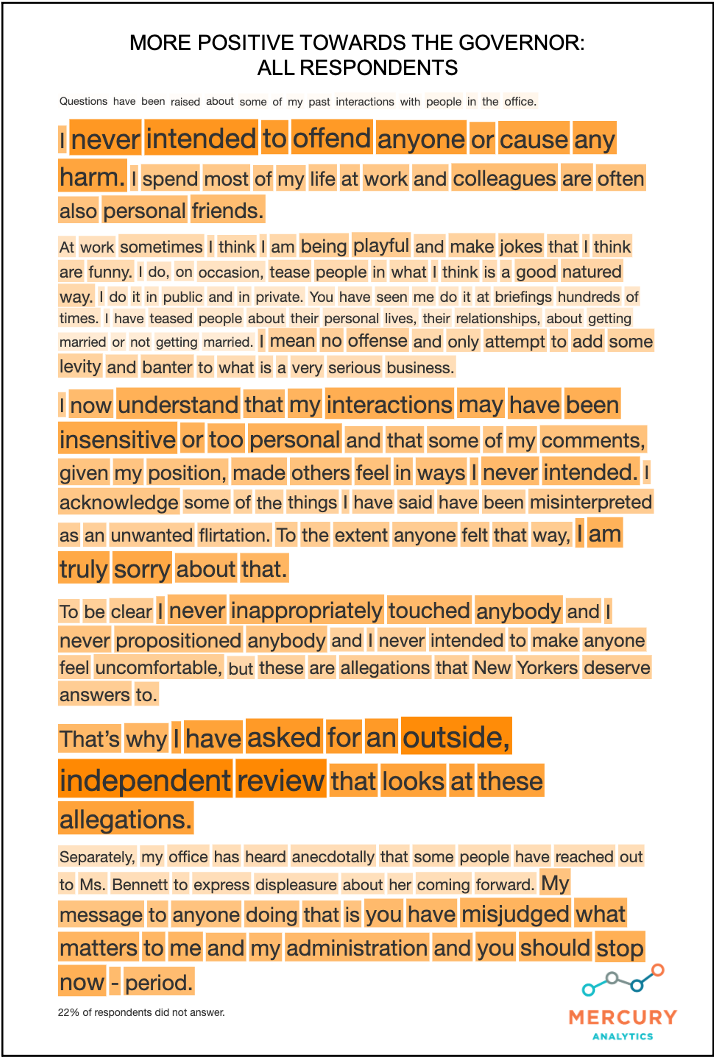 Across the board, Andrew Cuomo saying, “I think I am being playful and make jokes that I think are funny” and “I have teased people about their personal lives” were viewed negatively. The two most positive elements of Andrew Cuomo’s statement were his declaration that he never intended to offend, and that he has called for an outside, independent review.

There was weak absolute support for the statement he gave: 26% of respondents absolutely think it addresses the issue properly, while 28% absolutely do not and 46% are not sure. There is also discrepancy in the responses based on party affiliation.

Perception of the accusations and Cuomo’s statement feed into how people view the situation and which steps they support next. An interesting element of managing this crisis is the breakdown of Democrats vs. Republicans. If Cuomo’s team’s main concern is Democrats – he may be able to get away with this statement. Only 15% of Democrat respondents believe Cuomo should resign. The difference is clear on the opposite side of the aisle: 45% of Republicans think he should resign.

Crafting crisis communications is a tough job but there are tools that can confirm your statement is causing more good than harm, especially among your core audience.

Mercury Analytics conducted an overnight survey including a heatmap analysis of the recently released photo of New York Governor Andrew Cuomo’s alleged inappropriate behavior at a wedding in 2019, as well as a text highlighting analysis of Andrew Cuomo’s official statement regarding recent sexual harassment allegations against him. Both the photo and the statement were released on Sunday, February 28, 2021.

Mercury’s study tested reactions to the allegations against Governor Cuomo and his response among a national sample of n=1026 US adults aged 18+. Respondents were first asked a series of demographic questions followed by questions to help understand respondents’ current views on politics in America, their awareness of recent news involving Andrew Cuomo, and their perception of how Republican vs. Democratic politicians are treated.

Next, respondents were shown a photograph of Andrew Cuomo holding the face of a young woman at a wedding in 2019 and asked to click on any areas that they felt were inappropriate or of concern to them.

Then, respondents were asked to read the statement that Andrew Cuomo issued following the release of the photograph and highlight any ‘positive’ words in green or any ‘negative’ words in red.

Both exercises were followed by post-exposure question to assess their feelings about the content they saw.

For more information on Mercury’s heatmap or text highlighting, click here, and for more technical information about the study, please contact Jordan Kraft or at 202-386-6322 x 322.