On December 2, 2021, Alec Baldwin participated in an interview with ABC’s George Stephanopoulos, his first since the tragic shooting accident on the set of his new film ‘Rust’. While his appearance has been blasted by experts and on social media, in reality Baldwin’s decision to speak to ABC News last week was well received by those that watched the interview in its entirety.

We surveyed 400 participants from around the U.S. to learn about their favorability towards baldwin in response to the interview.

On December 2, 2021, Alec Baldwin participated in an interview with ABC’s George Stephanopoulos, his first since he fatally injured cinematographer Halyna Hutchins on the set of his film ‘Rust.’ As the general public, legal community and media all rushed to weigh in on whether this appearance was a smart move for Baldwin or not, Mercury Analytics surveyed 400 U.S.-based respondents to see how Baldwin fared in the eyes of gen pop.

Baldwin claims that he was handed a ‘cold gun’ with no live rounds by his assistant director Dave Halls and that he pulled the gun out of his holster in preparation for a scene twice. According to Baldwin, the gun discharged a live round the second time he pulled it out of the holster and penetrated Hutchins’ shoulder. The round then traveled and hit director Joel Souza in the shoulder, but he ultimately recovered from his injuries.

In the interview, Baldwin spoke at length about the events leading up to the tragedy, his relationship with Hutchins and his experience handling firearms on sets in his 40-year film and television career.

Legal experts had contrasting opinions about the impact that the interview would have on Baldwin, who is currently being investigated for criminal and civil charges in connection to the shooting.

Neama Rahmani, former assistant United States Attorney, spoke to The Los Angeles Times about Baldwin’s interview, which she called a “mistake” because his statements to Stephanopoulos can be used against him in court. Lara Yeretsian, a criminal defense attorney who also spoke to The Los Angeles Times, had a different opinion about the interview and stated, “Though it probably didn’t help his legal case, it probably didn’t hurt.”

As researchers, we were curious about the precise response to the interview, moment-to-moment and surveyed 400 respondents from around the country from December 4 to December 5. Over 3 in 4 of our participants who were familiar with Alec Baldwin had heard about the incident on the set of ‘Rust,’ while 24% had not. Participants were given the brief summary below about the incident:

As you may or may not have heard, on October 21, on a movie set in New Mexico, cinematographer Halyna Hutchins was fatally shot, and director Joel Souza was wounded while filming a new movie titled Rust, when a prop revolver being held and used by actor Alec Baldwin discharged a live round. The weapon had not been thoroughly checked for safety in advance.

Some feel Alec Baldwin did not follow proper procedures in his handling of the gun and with respect to safety on the movie set, while others feel he did nothing wrong.

The incident is being investigated by the Santa Fe County Sheriff’s Office, the New Mexico First Judicial District Attorney and the New Mexico Occupational Health and Safety Bureau. Production of the film was suspended indefinitely. The incident sparked a debate about safety in the film industry, the treatment of its employees and the use of real guns as props.

After reading the incident review, respondents identified statements that reflected their opinions about Baldwin, which are listed in the chart below: 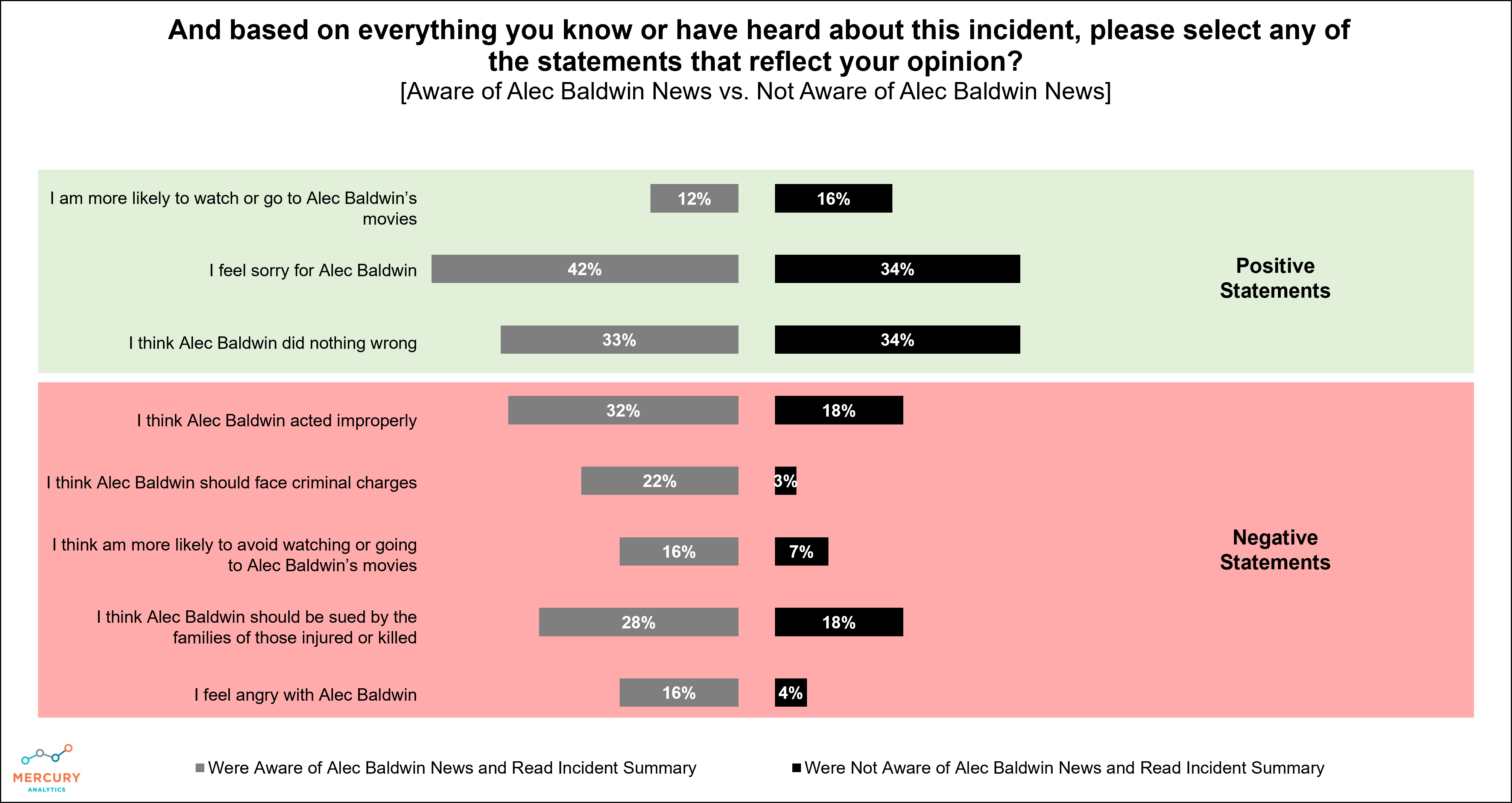 A key takeaway from the survey is that respondents who were previously aware of the news about what happened on the set of ‘Rust’ were more negative and less positive towards Baldwin, while those who were not previously aware of the news were more sympathetic towards the actor. This indicates that news, chatter and the social media impact of the “buzz” around the story is negatively impacting the public’s perception of Alec Baldwin.

dial-testing baldwin for favorability and believability

Respondents were then shown the full 30-minute interview via our moment-to-moment dial-testing technology, which allows participants to rate each and every moment of a video, raising or lowering their rating as their opinions fluctuate from more supportive or positive to less supportive or negative. After watching and rating the interview, we asked respondents the same questions that identified the statements reflecting their opinions.

Q: As you watch this video, we want you to consider if what you are seeing and hearing makes you believe Alec Baldwin is MORE or LESS favorable.

Moments when Baldwin was more favorable include when he spoke about his first impression of Hutchins, her legacy and work ethic.

Moments when Baldwin was less favorable include when he cried when recalling memories of Hutchins and spoke about his lack of concerns regarding safety protocols on set.

Q: As you watch this video, we want you to consider if what you are seeing and hearing makes you believe Alec Baldwin is MORE or LESS believable.

Moments when Alec Baldwin was more believable include when a statement made by Baldwin’s colleague citing safety concerns was read aloud by Stephanopoulous.

Moments when Baldwin was less believable include when he spoke about supporting a colleague on set who resigned over safety issues and about being willing to reallocate his own salary to providing better housing options for set members.

Across all respondents, negative statement ratings dropped on all metrics after respondents watched the interview, while positive ratings rose which indicates that the net effect of the interview was positive.

the net impact of the baldwin interview was positive

The key takeaway from our research is this: The interview had a net positive impact on Baldwin’s public perception among those who viewed the interview in its entirety.

Our dial-testing capability showcases the high points and the low points of the interview, touching on the broader impact of viewing a social media clip (either positive or negative) versus viewing an event in its entirety.

In our analysis, our ‘lift’ or ‘percentage change’ metric, which calculates the relative difference between two values and expresses this difference in a percentage, indicates that respondents’ likelihood to watch or go to Alec Baldwin’s movies after seeing the interview in its entirety increased by 41%, while respondents’ opinion that Alec Baldwin acted improperly decreased by 25%.

As shown in the graph below, the interview has positively impacted respondents and even influenced those who had previously felt that Baldwin had acted improperly on set. 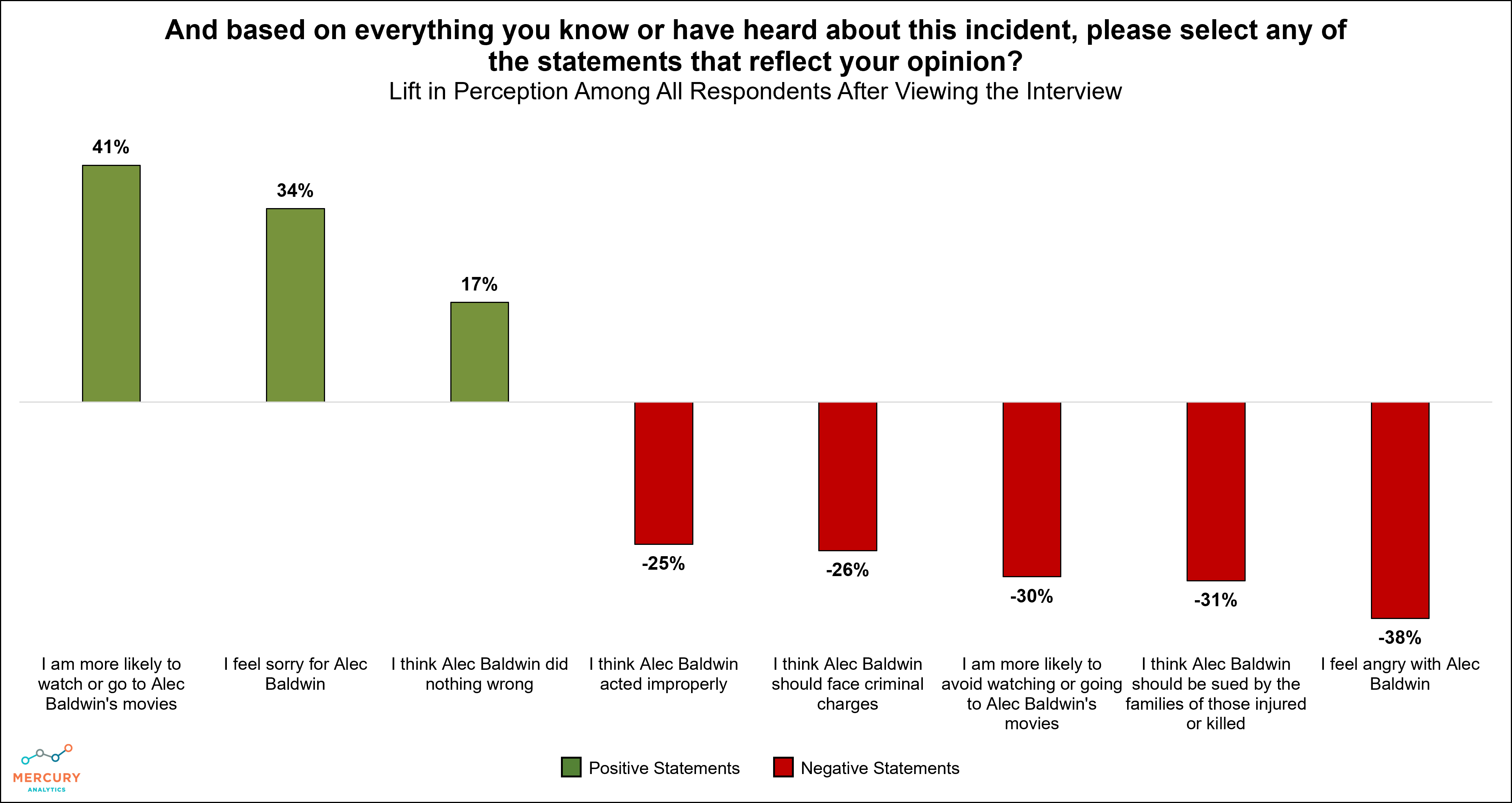 While interviews on controversial events and subjects can pose a considerable risk, including opening up the subject to scrutiny and the circulation of curated clips out of context on social media, our study shows that Baldwin ultimately fared well among those who viewed the entire interview.

Public relations and media firms who handle crisis communications can enhance their approach by adding dial testing to their research toolkits.

Mercury Analytics conducted an overnight survey including dial-tests of ABC’s interview with Alec Baldwin post the ‘Rust’ shooting. This interview was published on December 2, 2021.

The thirty-minute-long interview featured Alec Baldwin discussing the events leading up to the tragedy, his experience working with Hutchins, the film’s cinematographer who he fatally shot, and his on-set safety training over his 40-year career as a film and television actor.

Mercury’s study tested the video’s performance among a national sample of n=400 respondents aged 18+. Respondents were first asked a series of demographic questions followed by questions to help understand respondents’ current knowledge regarding celebrities in the news and whether or not they viewed each celebrity positively or negatively.

Before the close of the survey, respondents were asked post-exposure questions to assess their views on the video and their opinions of Alec Baldwin.

For more information on Mercury’s quantitative and dial-testing technologies, click here, and for more technical information about the study, please contact Jordan Kraft or call us at 202-386-6322 x 322.