Gen Z is not impressed

Heading into the big weekend, we decided to take a look at this season’s Super Bowl ads to see how they resonate.

Which brands hit the mark with their “super” spot?  Among the 16 ads tested, M&Ms, Cheetos and Ford topped the list, while Vroom, Squarespace and Mercari filled out the bottom of the pack.

It may come as no surprise, but Gen Z is not entirely impressed by much though we found some moments that moved the needle, even for Gen Z.  For the most part, it’s clear that while traditional ads appeal to Millennials (Really? Yes, really.) and Gen X, Gen Z will pick and choose their stimuli and likely won’t recognize the Boomer, Gen X and Millennial heroes of pre-streaming TV. 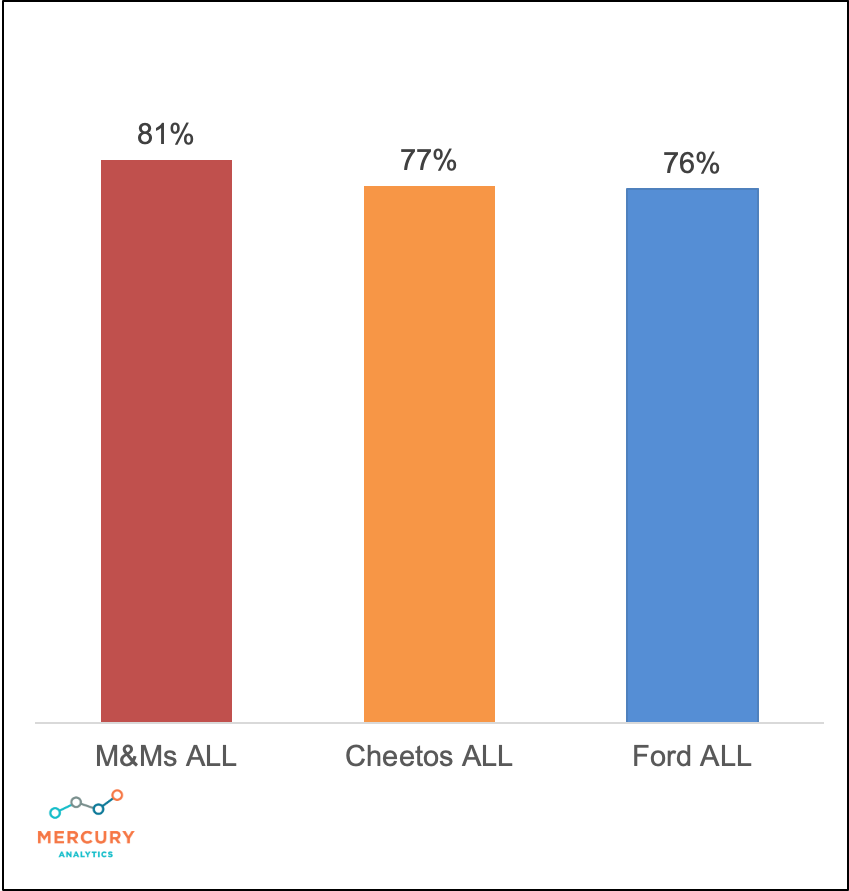 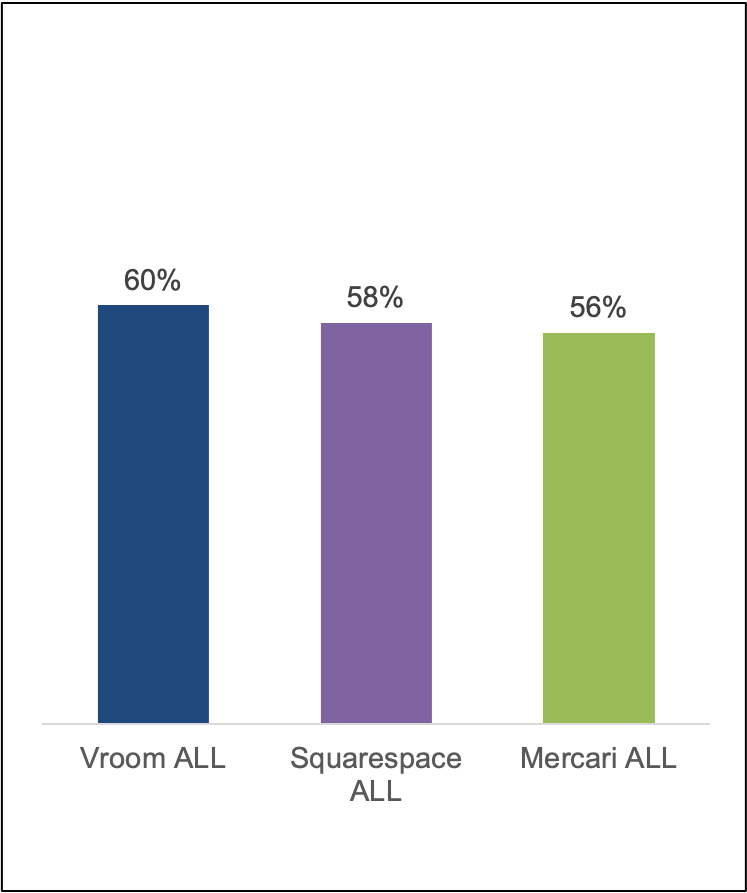 Q: Overall, how would you rate this commercial? (One of the best or Good)

M&M’s nailed it with this ad across all generations. Even Gen Z, who were consistently unimpressed by most of the tested ads, related to insincere apologies for cramped seating and interactions with the “Karens” of the world.

While Super Bowl watchers of all ages tended to agree that the ad was entertaining from start to finish, Gen Z picked and chose its moments, maintaining its distance from the pack. 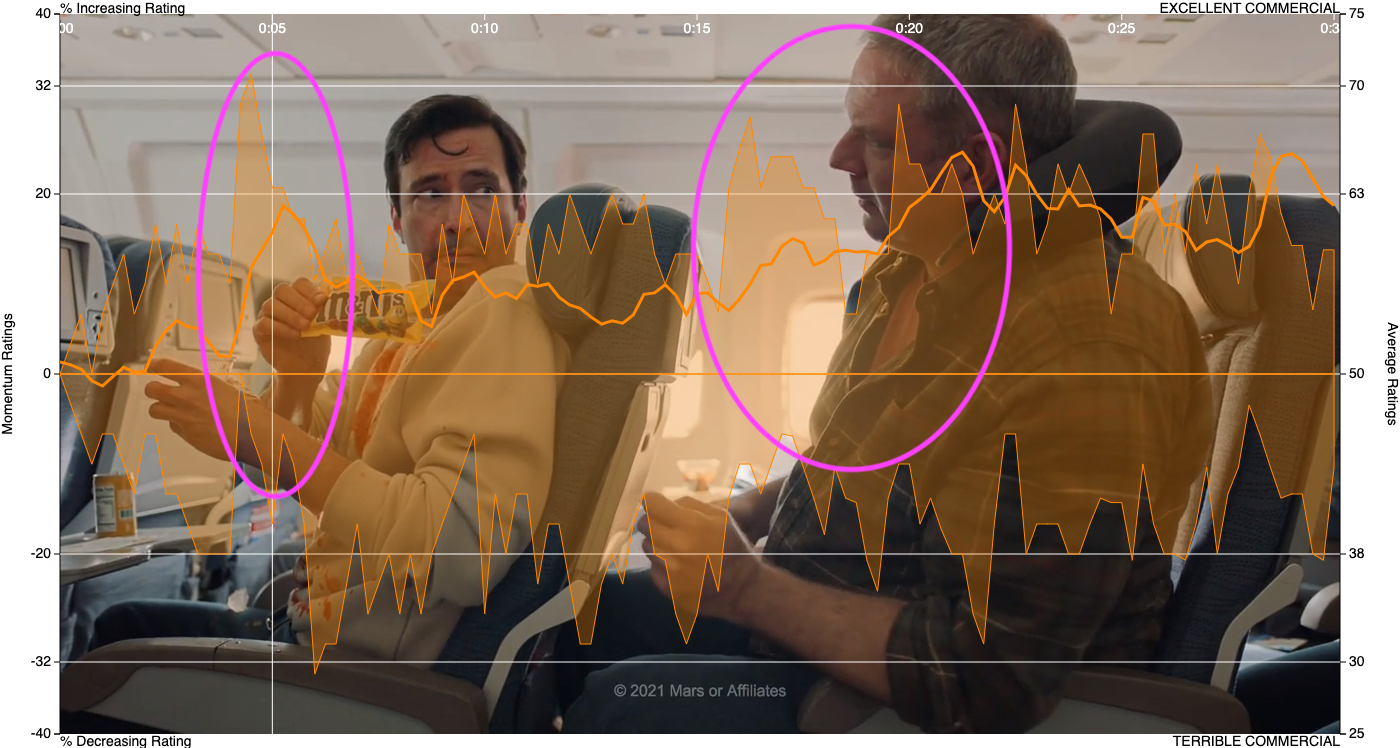 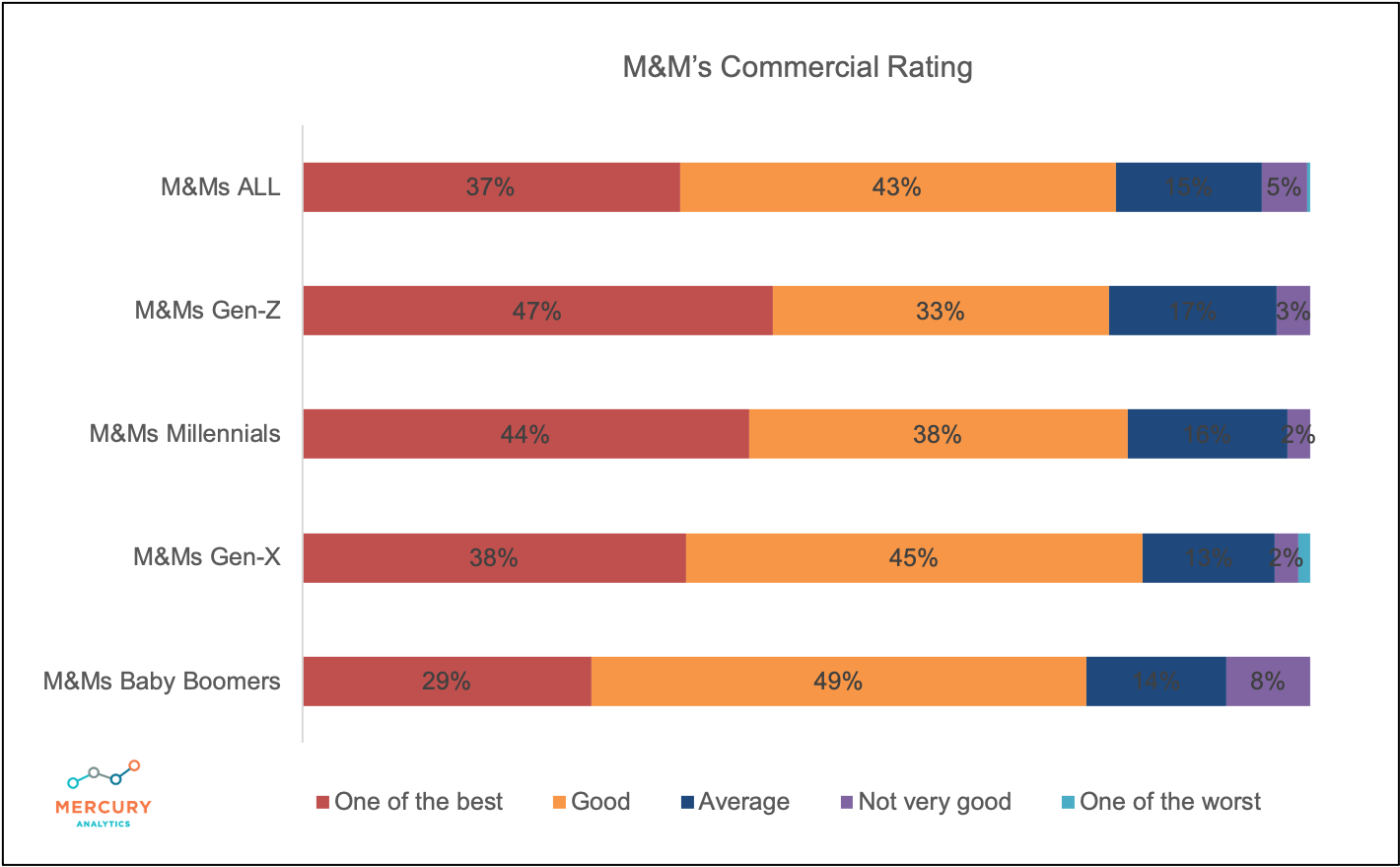 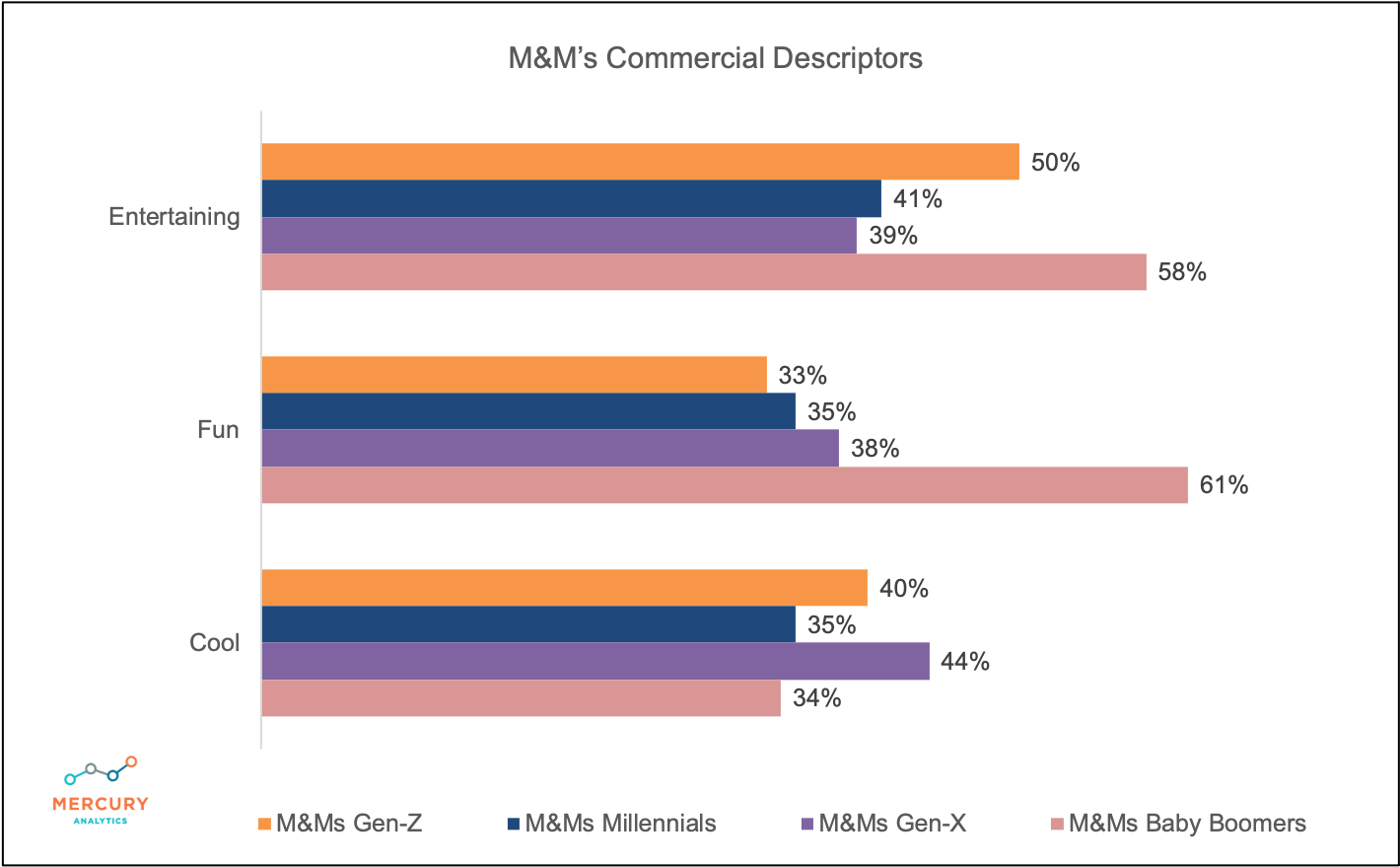 While Gen X were seemingly well engaged when watching Mila and Ashton on the screen, Shaggy’s singing interlude underwhelmed them. Millennials, on the other hand, were all in on Shaggy, Mila, and Ashton throughout. Boomers and Gen Z were positive yet notably less so versus those in between.

Cheetos did well selecting Mila and Ashton for its ad, as the Mila effect, and possibly Ashton’s too, led to a rise in ratings whenever the scene shifted to focus on the TV sitcom sweethearts. 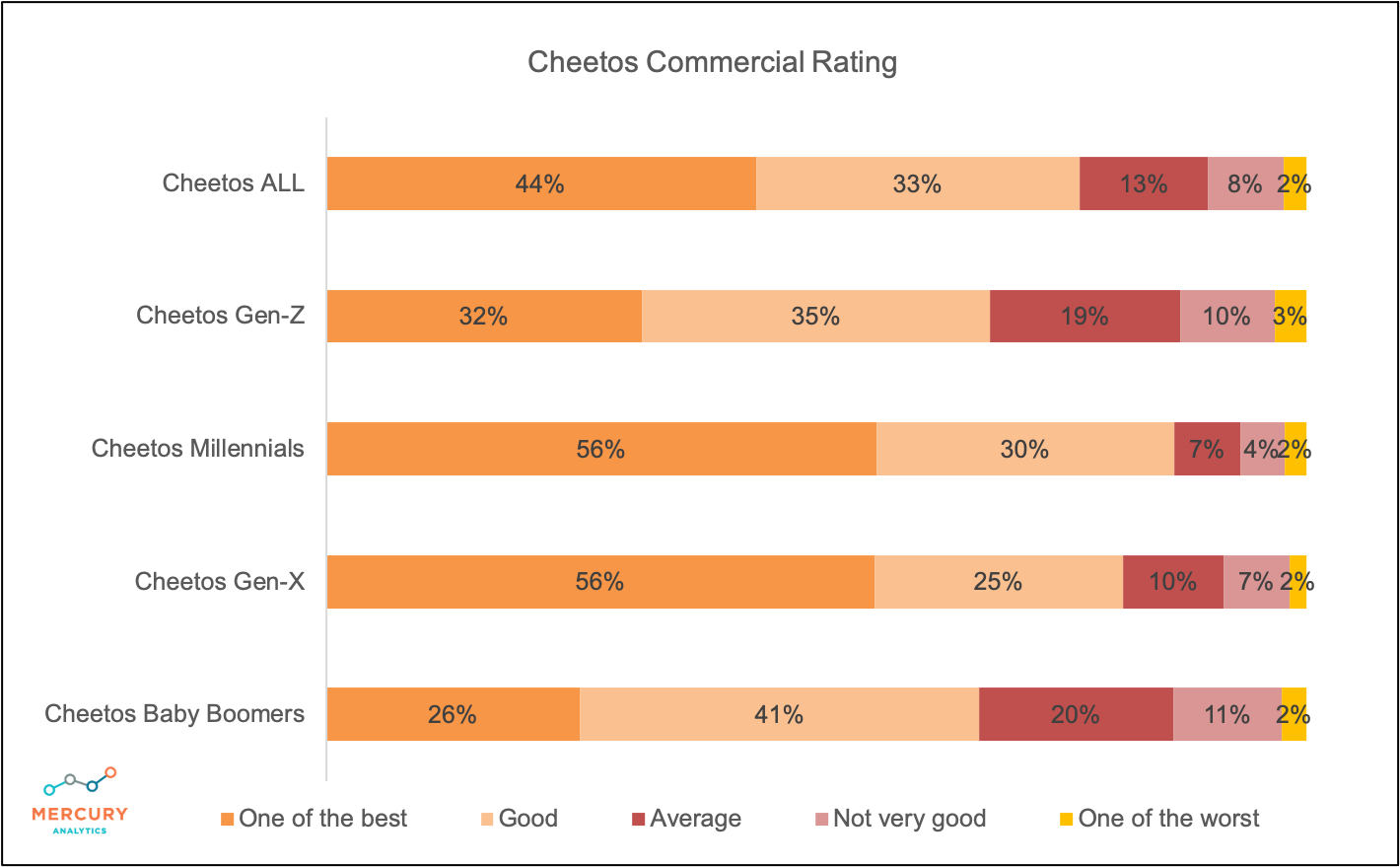 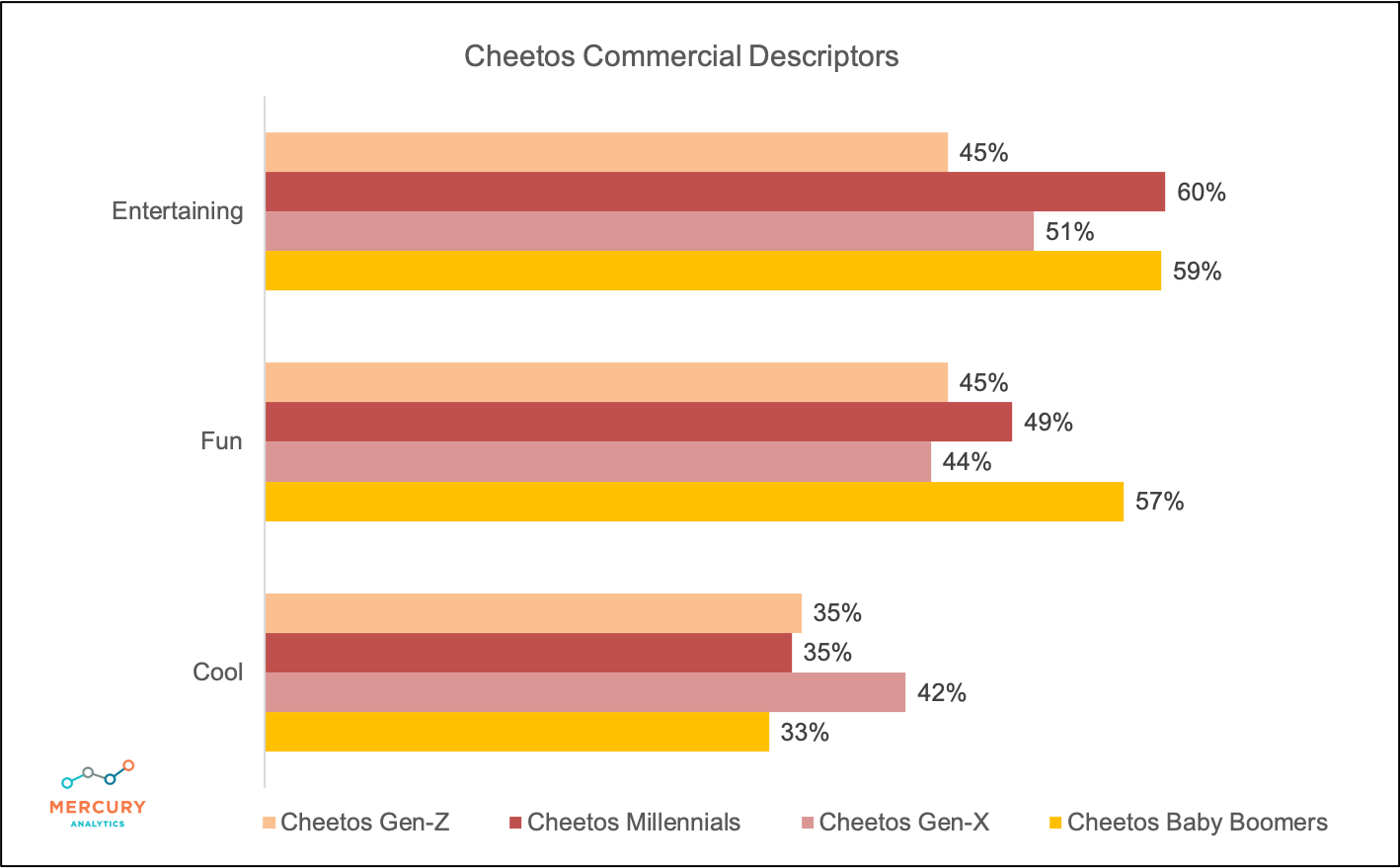 It’s been a rough year for everyone. Ford’s emotional appeal to hold the line had the strongest impact on Boomers who reacted to scenes of health care workers suiting up in PPE and simple imagery of human touch — holding hands.

Ford veered away from the pack with its plea to hold the line, reassuring us that we’re almost there.  Gen Z was, once again, less enthusiastic than the older generations, but Ford managed to reach the Baby Boomer Generation, closely followed by Gen Xers and Millennials. 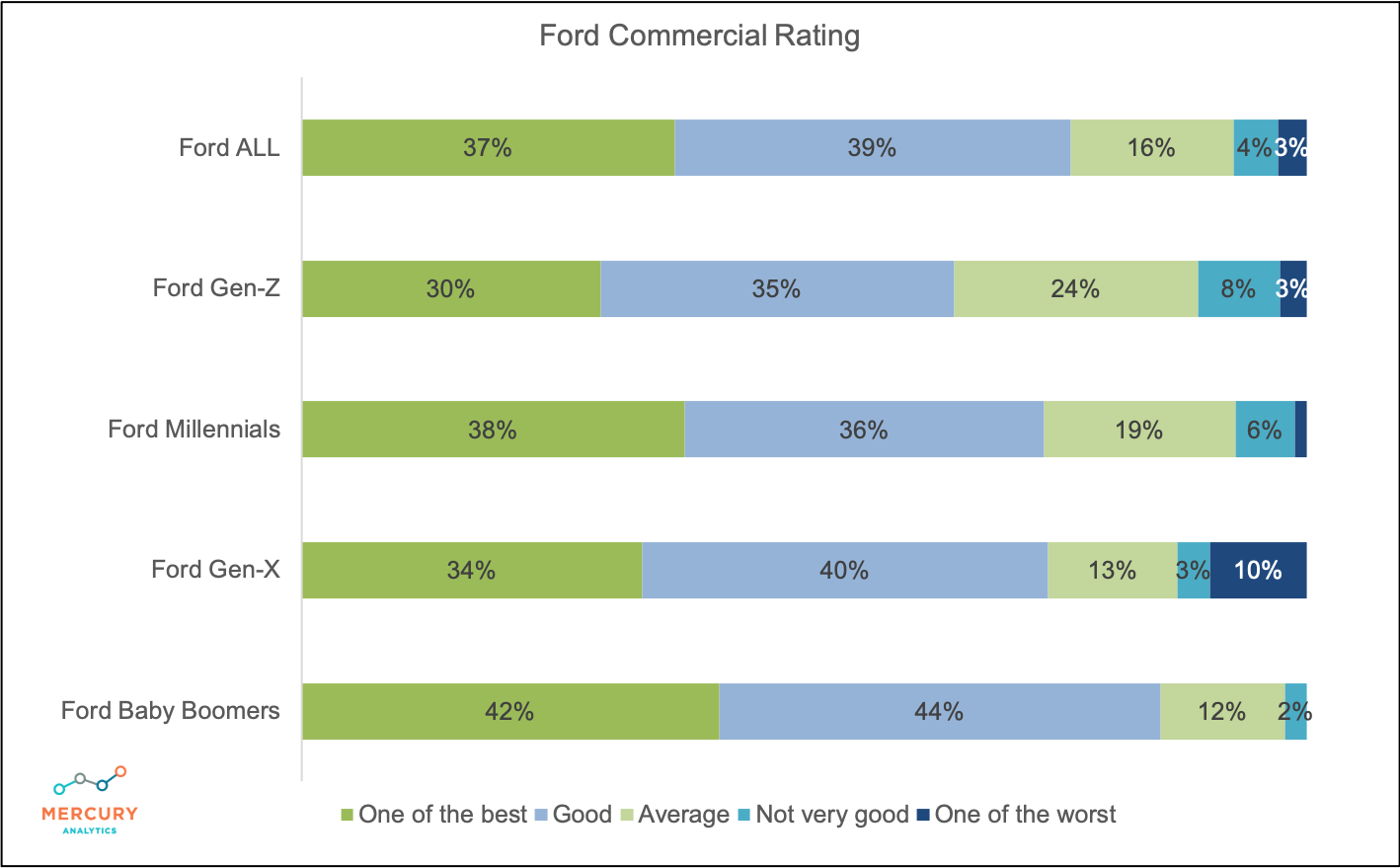 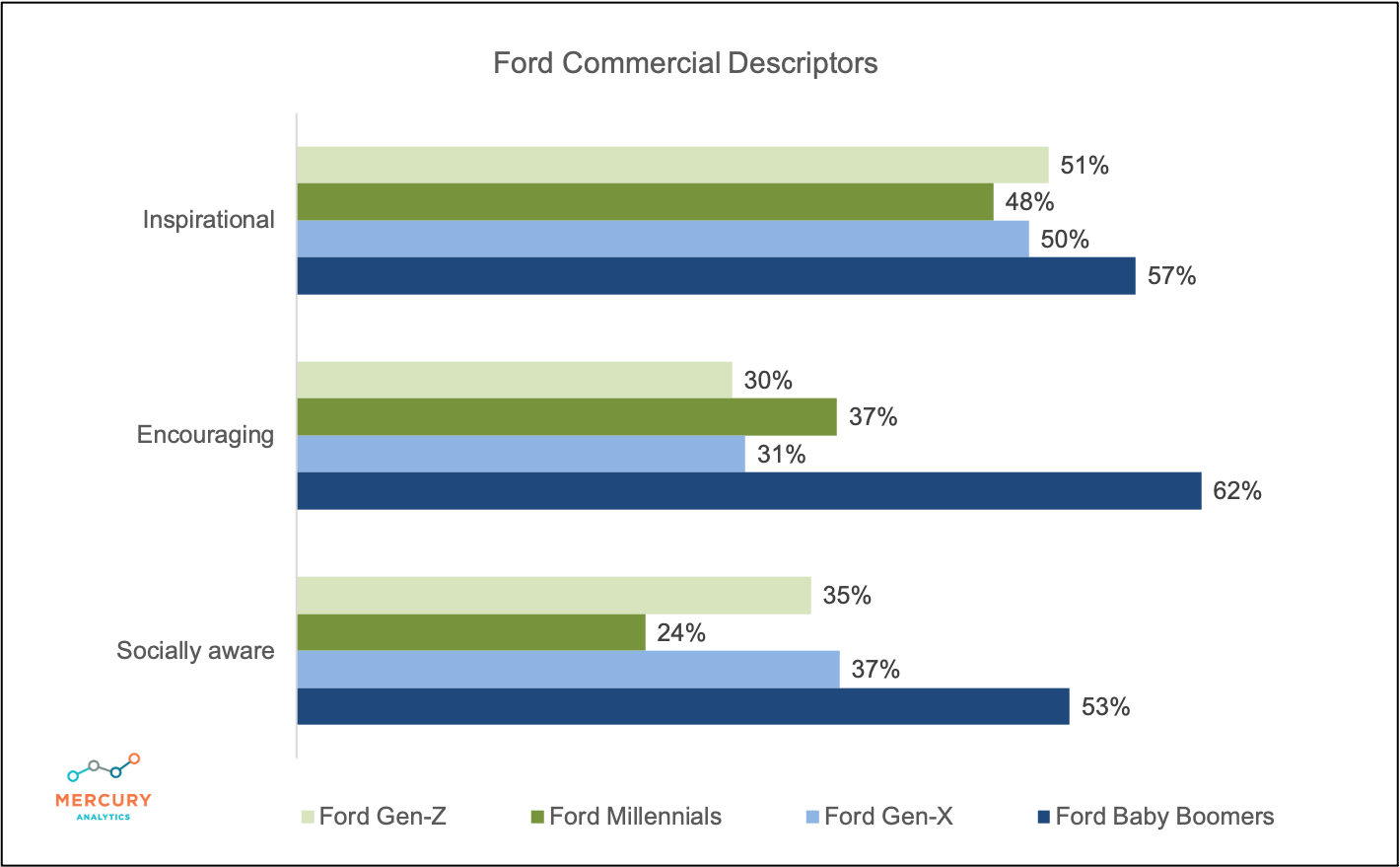 Boomers and Gen Z were pretty neutral on the Vroom spot until we were taken from danger and thrust into a serene, suburban looking, front yard setting.  As for the reaction to quietly receiving a car delivered to the front lawn? Boomers were all about it while Gen Z was less enthused.

If Millennials and Gen X are the key targets here, then Vroom nailed it.  Gen Z is a ways off but Boomers came around when stress was taken out of the equation. 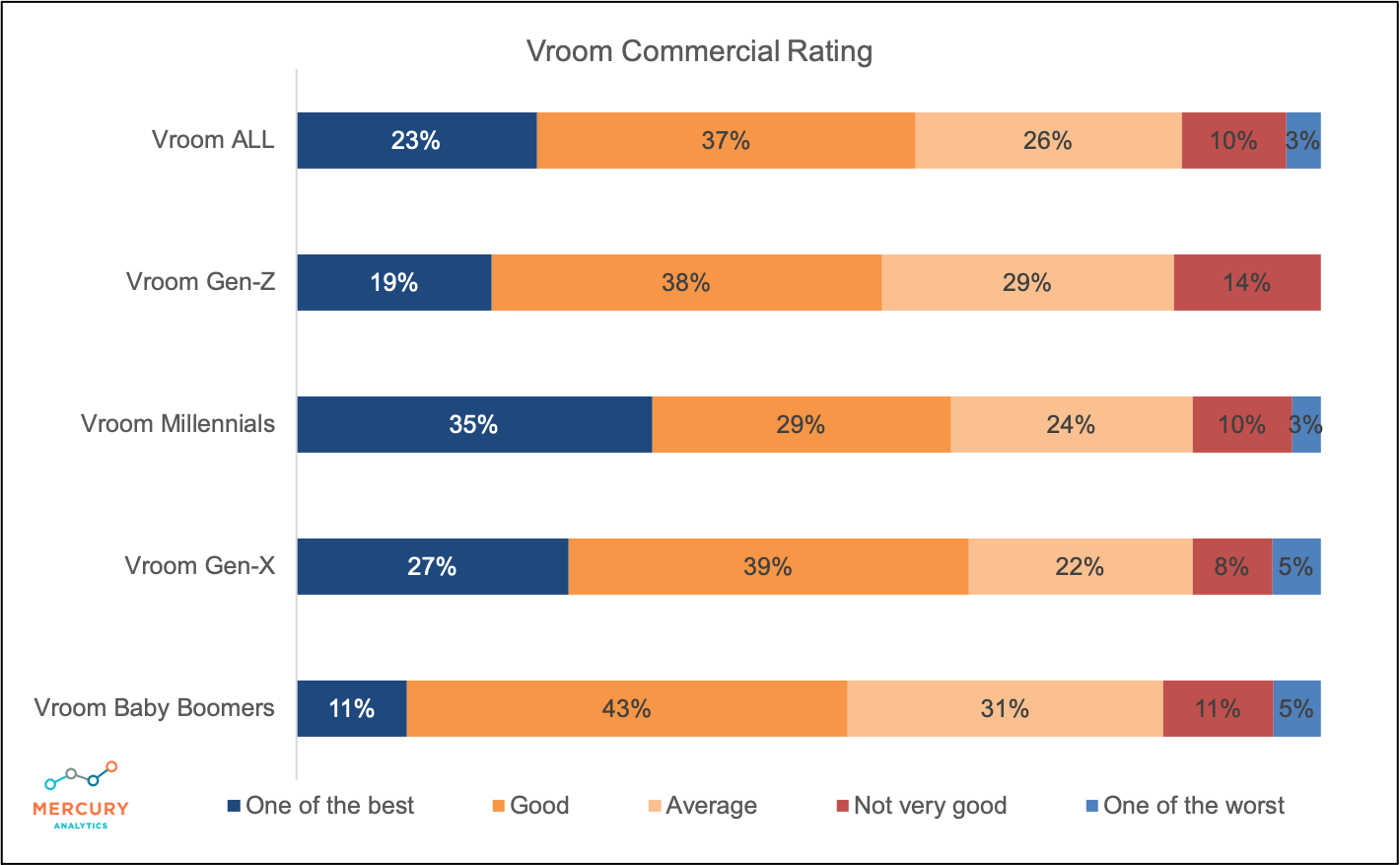 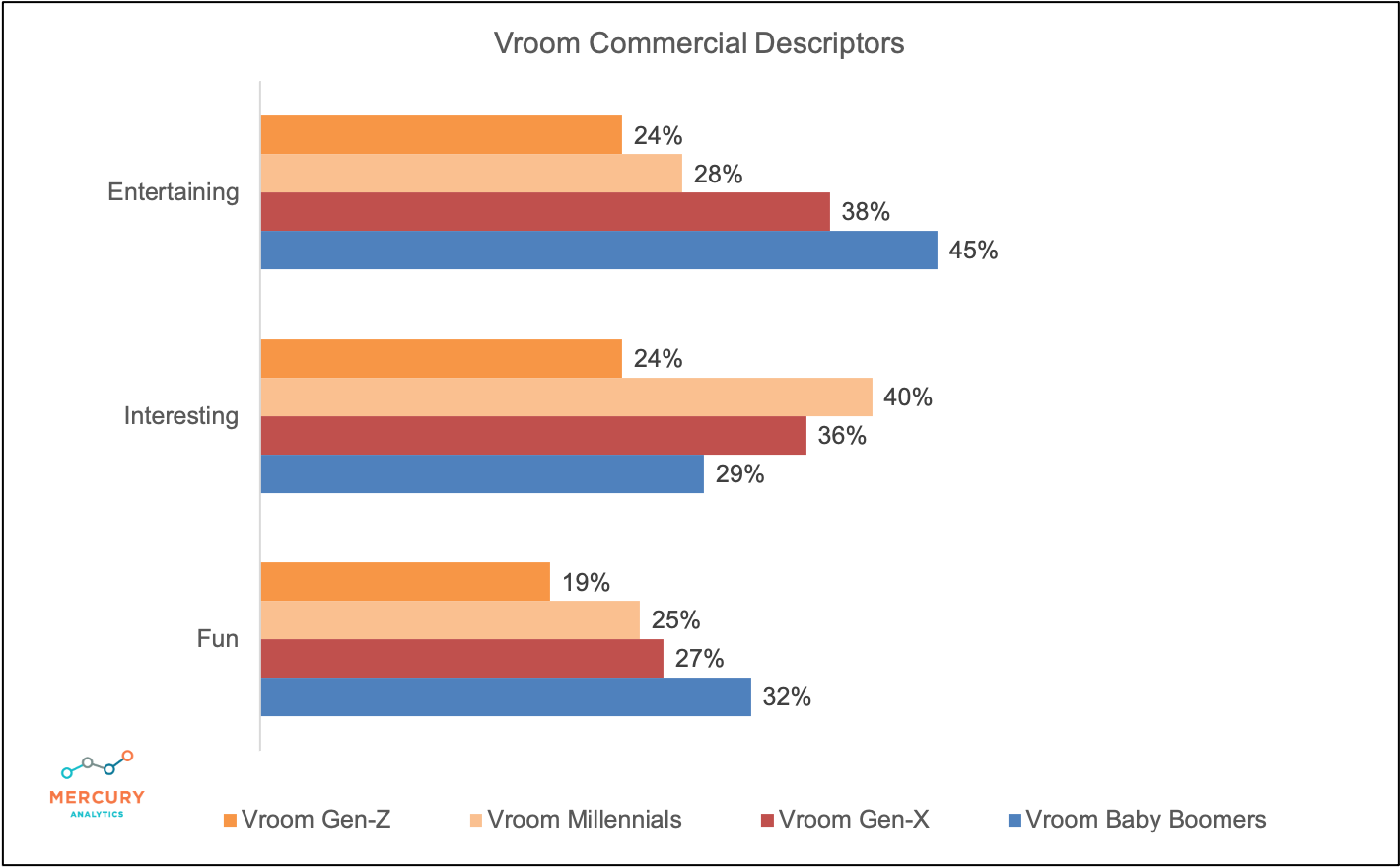 All ages livened up once the iconic Dolly Parton 9 to 5 song (reworked into 5 to 9) started up, though Gen Zers seemed to be a little slow to associate the play on the 1980 hit to Dolly herself. 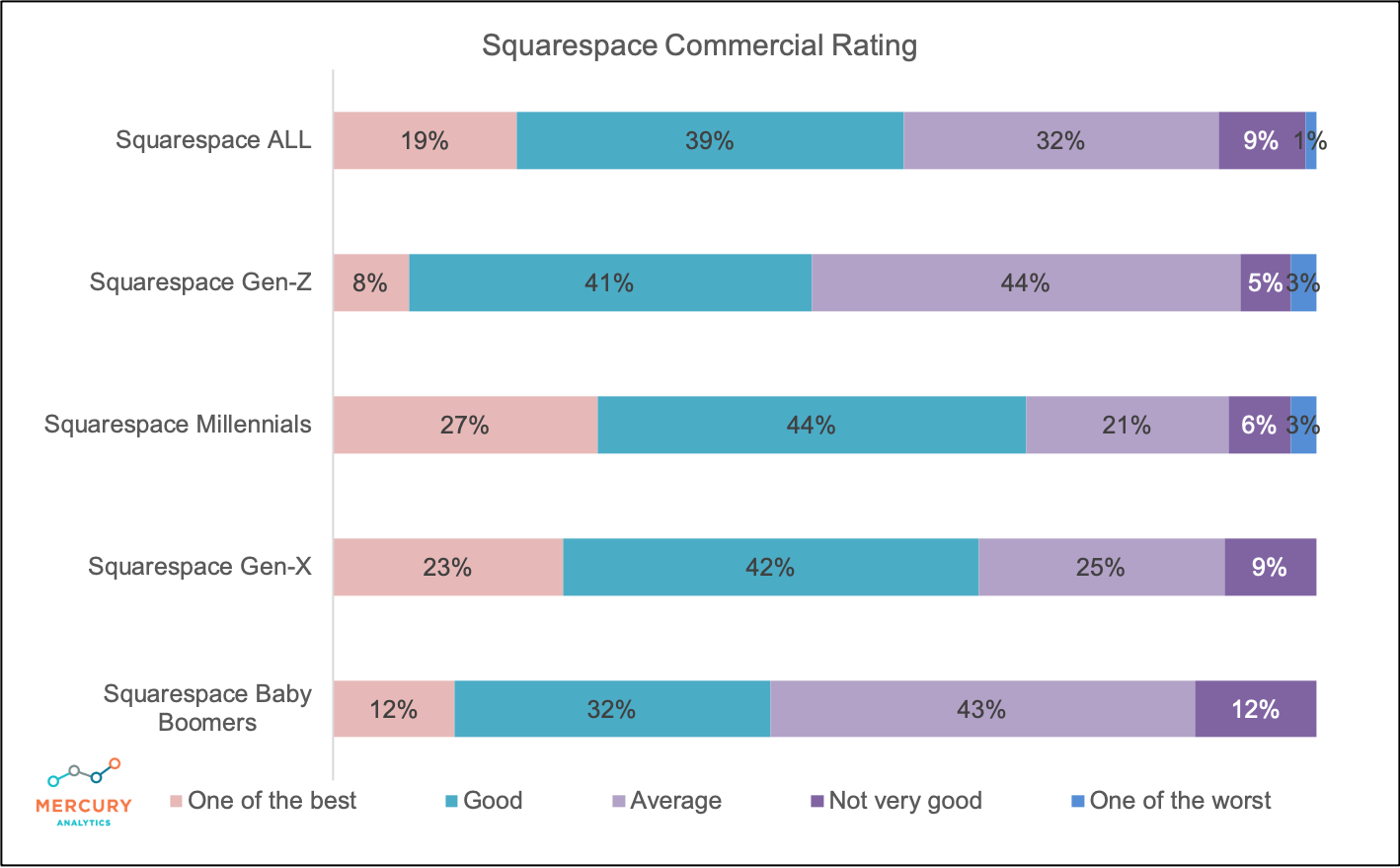 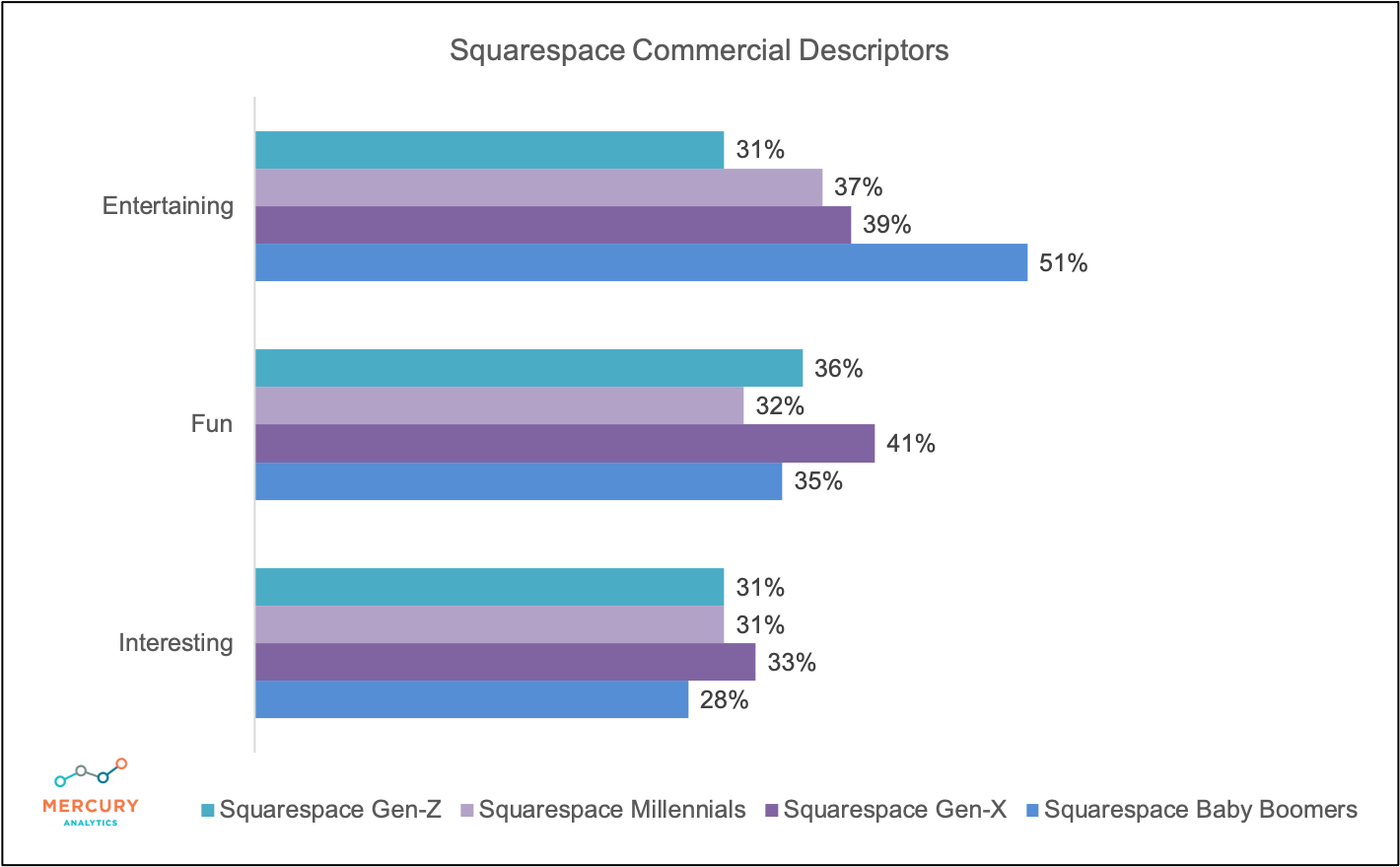 Less interested in watching newlyweds open gifts, Gen Z was moved by the introduction of a smooth transition to movie night on the couch with friends.

Millennials and Gen Xers were most consistently positive on Mercari’s ad, while Boomers and Gen Z were less impressed. 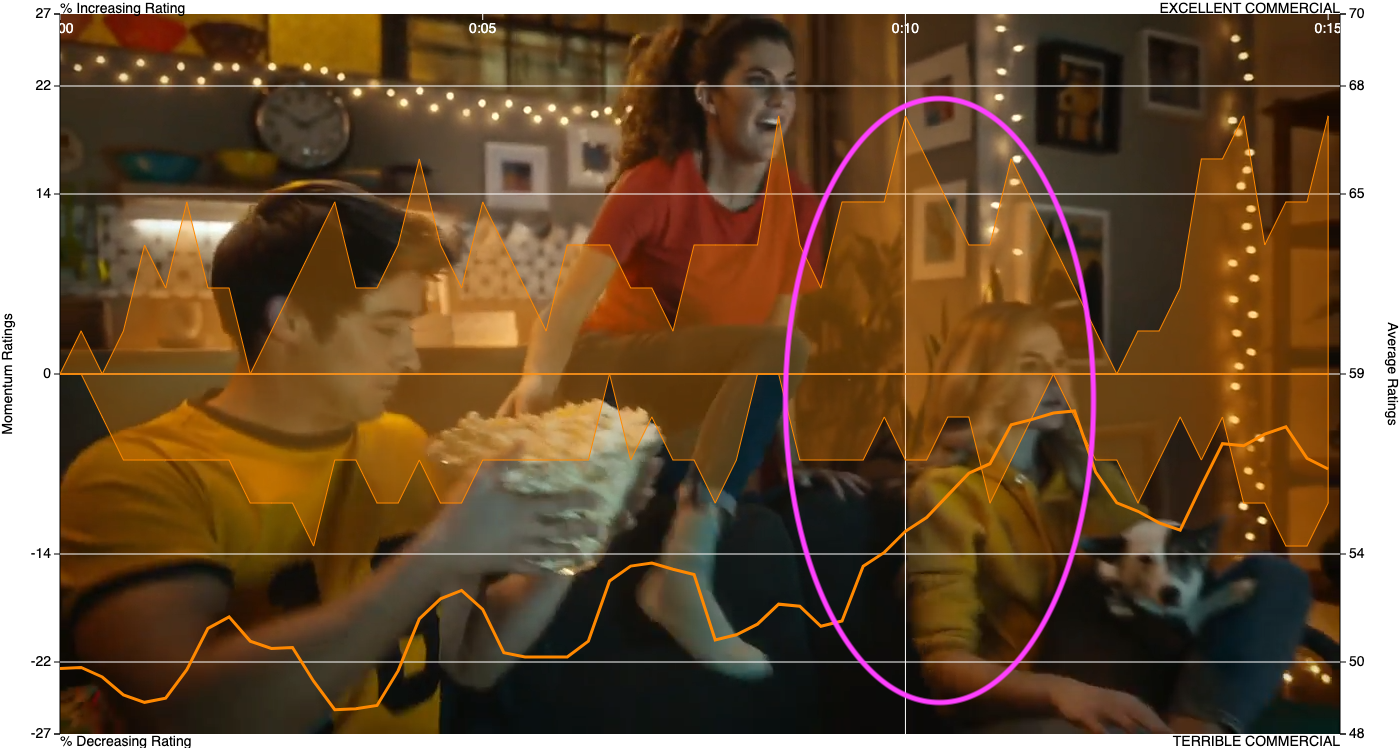 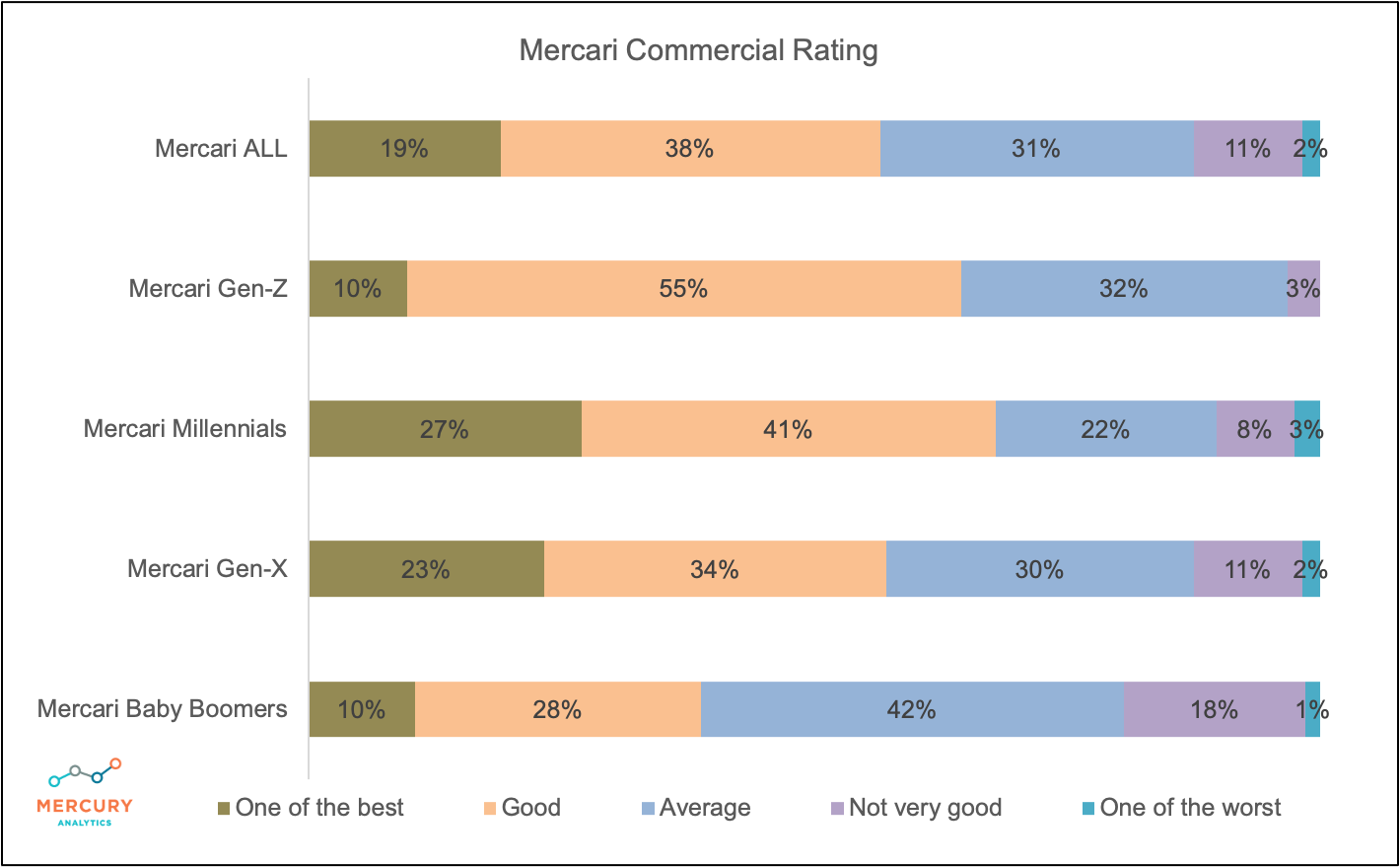 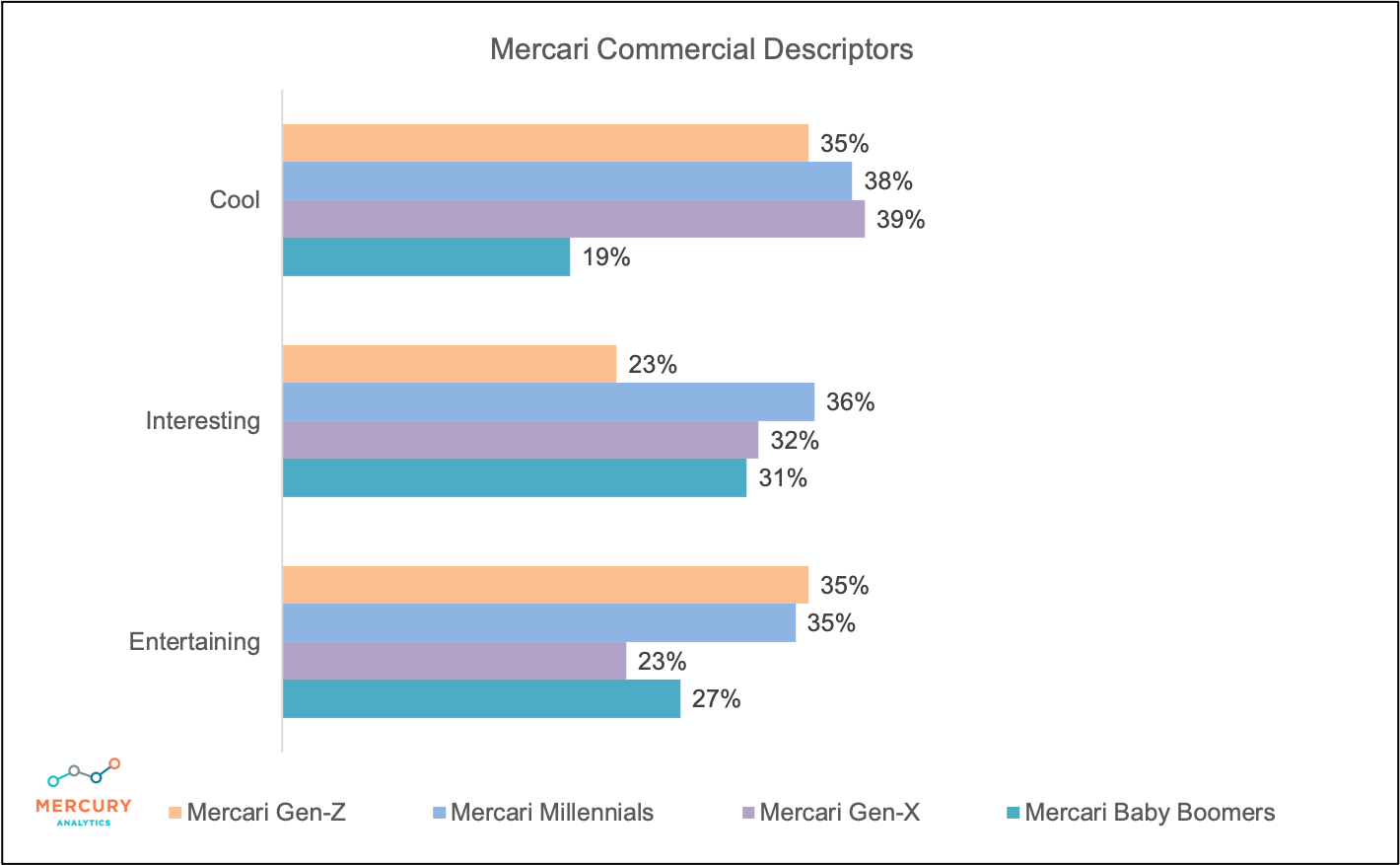 Mercury’s study tested the performance of these commercials among a national sample of n=1043 of US adults aged 18+ who indicated that they were ‘very’ or ‘somewhat’ likely to watch the Super Bowl this weekend. Additional quotas were set to ensure the sample was representative of age, gender, and ethnicity demographic breakdowns in the US.

Respondents were first asked a series of demographic questions followed by questions to help understand respondents’ TV consumption patterns and likelihood to watch the Super Bowl. Next, respondents were each shown four out of sixteen commercials and asked to rate their feelings about them on a moment-to-moment basis. Each video was randomly-assigned, and each set of commercials was shown in random order to eliminate any biases resulting from viewing order.

Between watching each commercial, respondents were asked post-exposure questions to assess their opinions of the commercial and brand.