“flamin’ hot” Heats up the charts;

Heading into the big weekend and for the second year in a row, we decided to take a look at this season’s Super Bowl ads to see how they resonated with audiences.

Among the 16 ads that we tested, Doritos & Cheetos Flamin’ Hot, Budweiser’s Clydesdales Ad and Chewy’s Dog Commercial were this year’s top contenders. Despite packing major star power with Trevor Noah, Jennifer Coolidge and Gwyneth Paltrow, Uber Eats’ “Don’t Eats” campaign fell flat and each of the individual ads rounded out our bottom three.

Consistent with last year’s review results, Generation Z is hard to please when it comes to traditional advertising. Though they rated similarly to other groups at specific awe-inspiring moments, like when the Clydesdales horse gets back on its feet after being injured, their overall ratings were lower than they were for Millennials, Baby Boomers and Gen X. 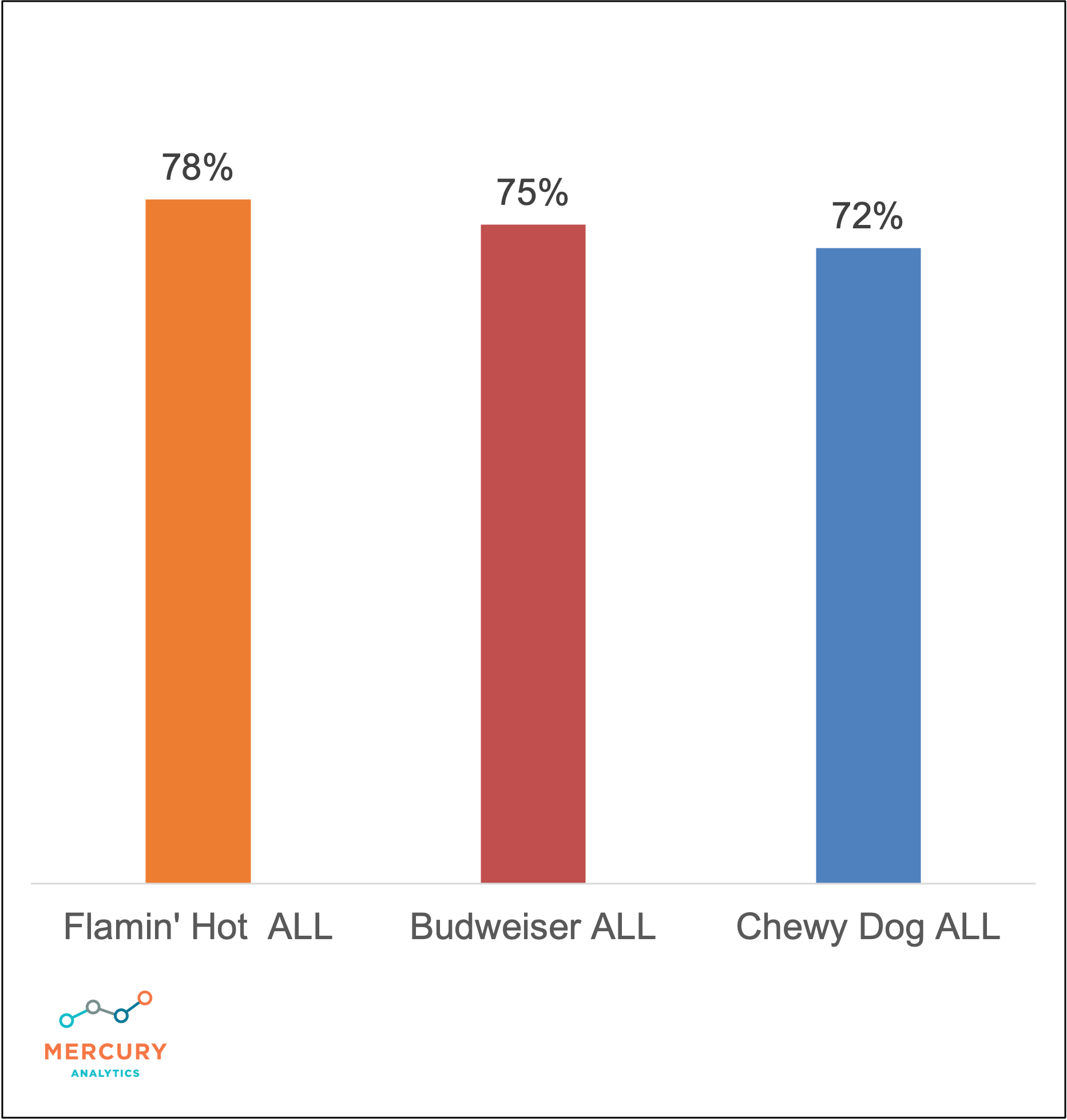 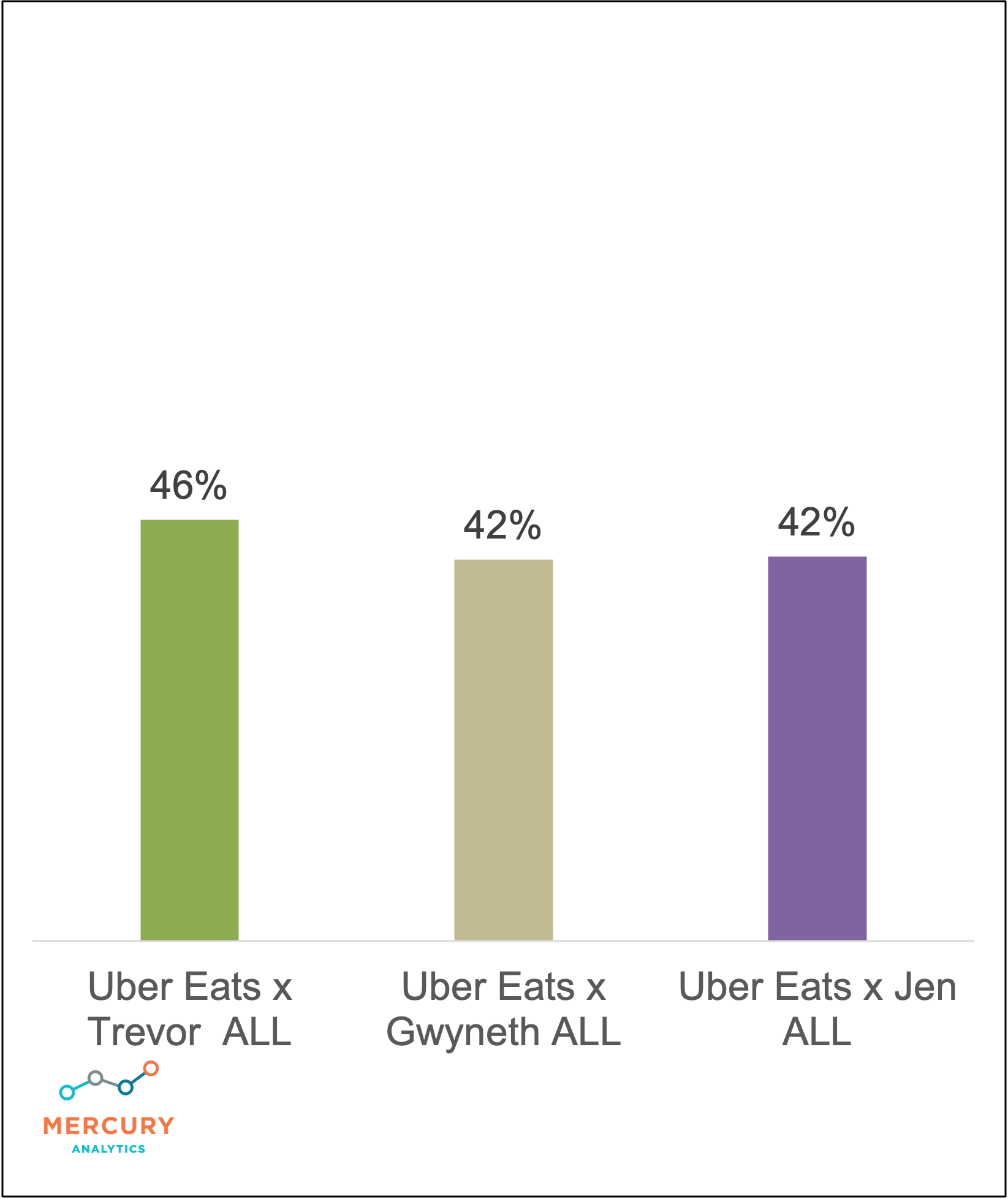 Q: Overall, how would you rate this commercial? (One of the best or Good)

Salt n Pepa’s iconic song “Push It” served as a backdrop to the “Flamin’ Hot” ad and ratings peaked when a sloth stole a bag of Flamin’ Hot Doritos and climbed up a tree.

Flamin’ Hot nailed it with this advertisement across generations. Both Gen X and Millennials loved the jungle-themed content. 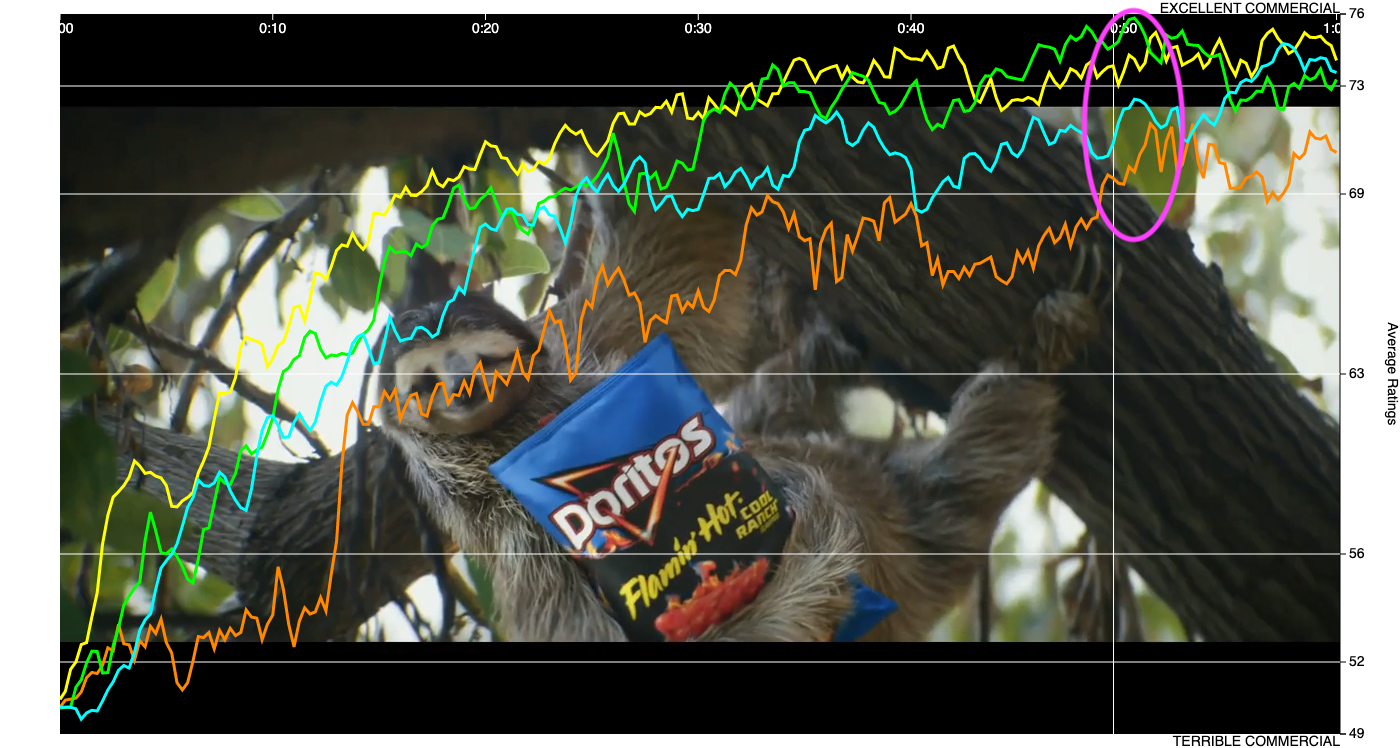 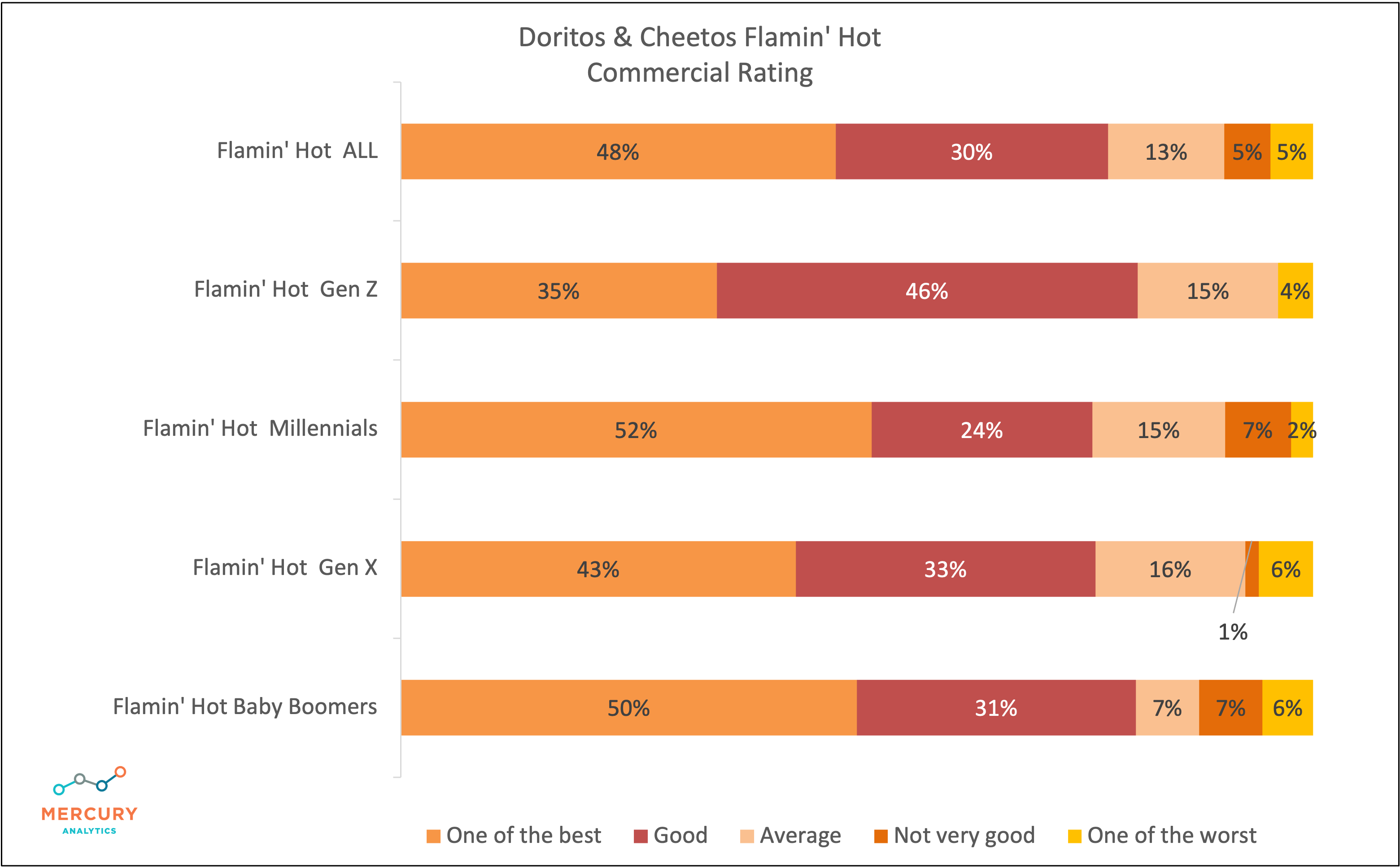 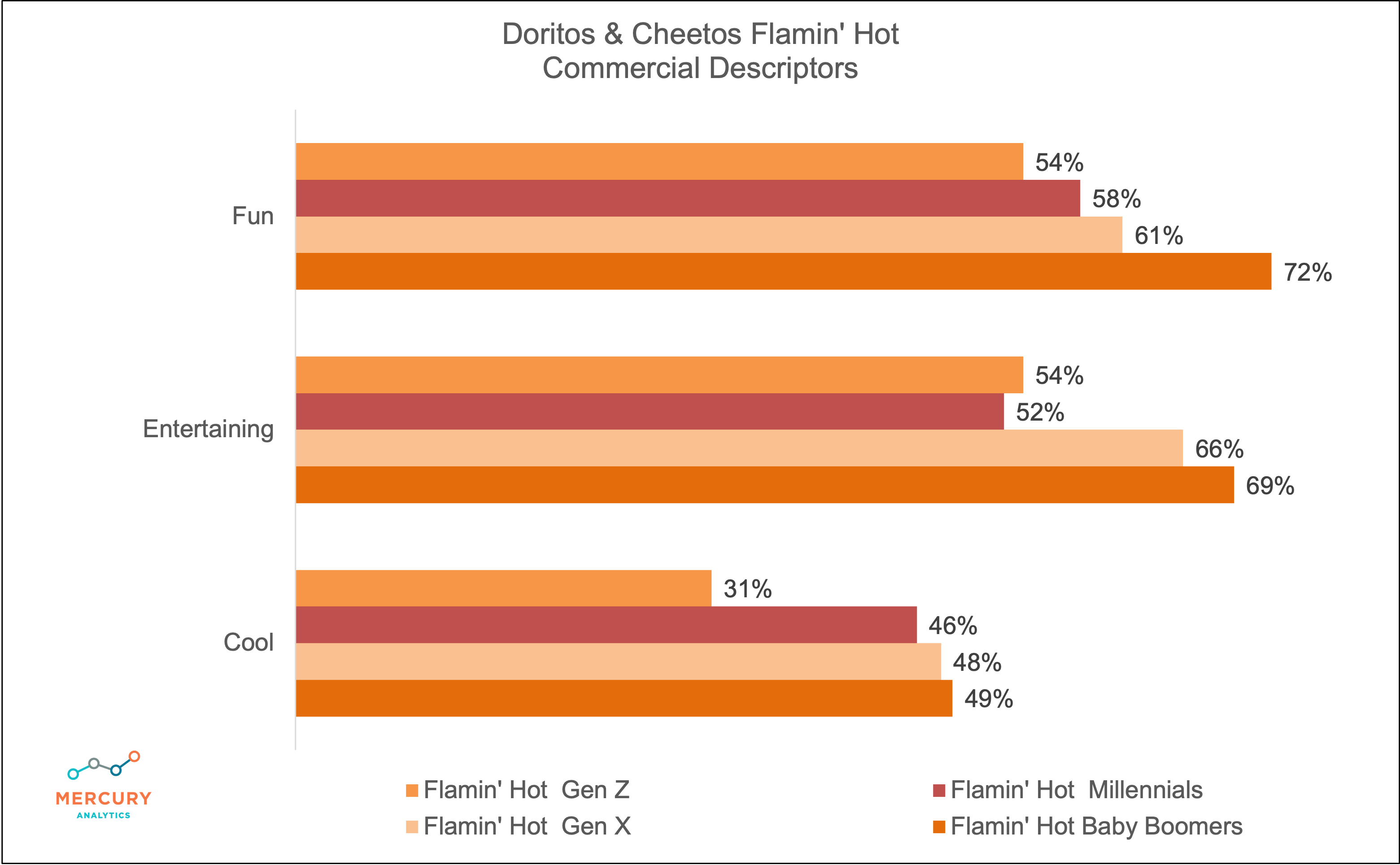 Budweiser pulling at the heart strings

Nothing says classic advertising quite like Budweiser’s Clydesdale ads which have been running on and off at the Big Game since 1991. This year’s ad, which is filled with emotion and messaging about American “toughness,” ranked most favorably with Boomers and least favorably with Gen Z.

All groups increased their rating as a clip of the the Clydesdale horse running after being injured appeared on screen. 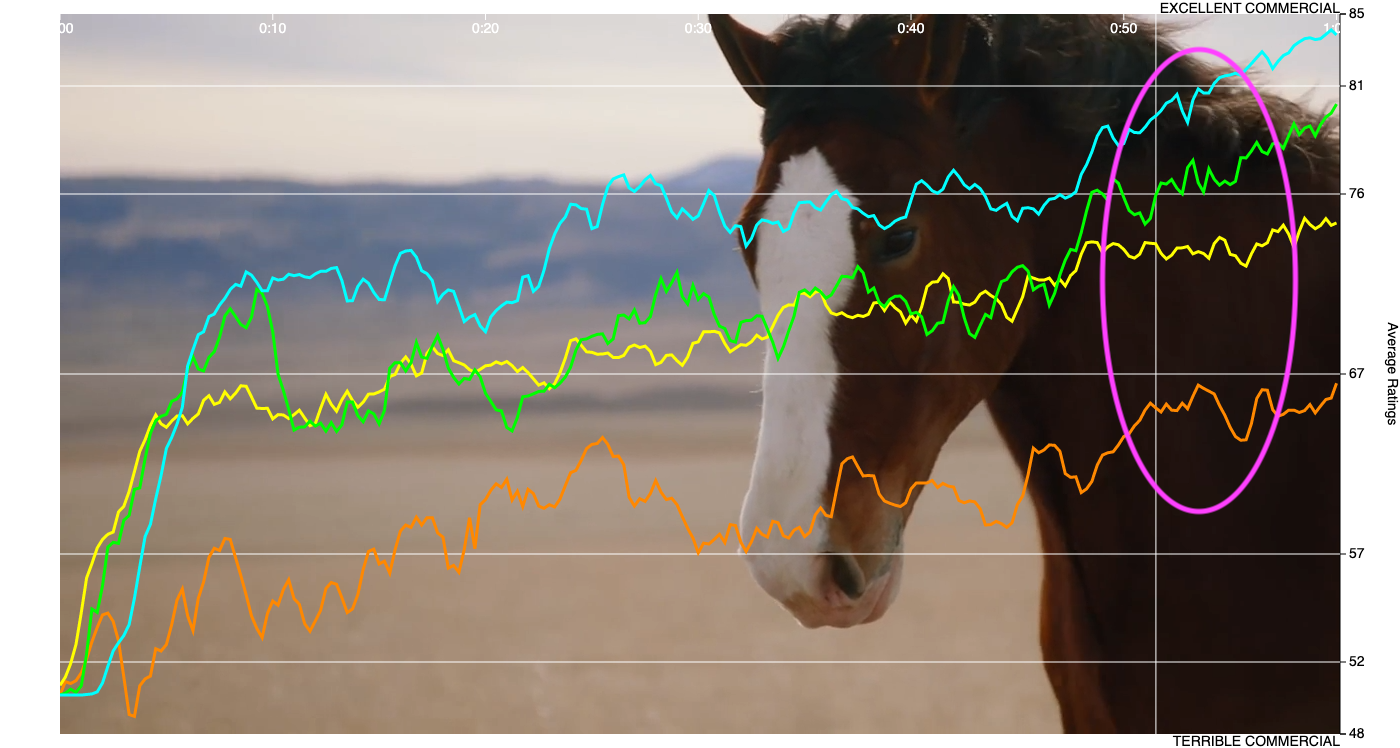 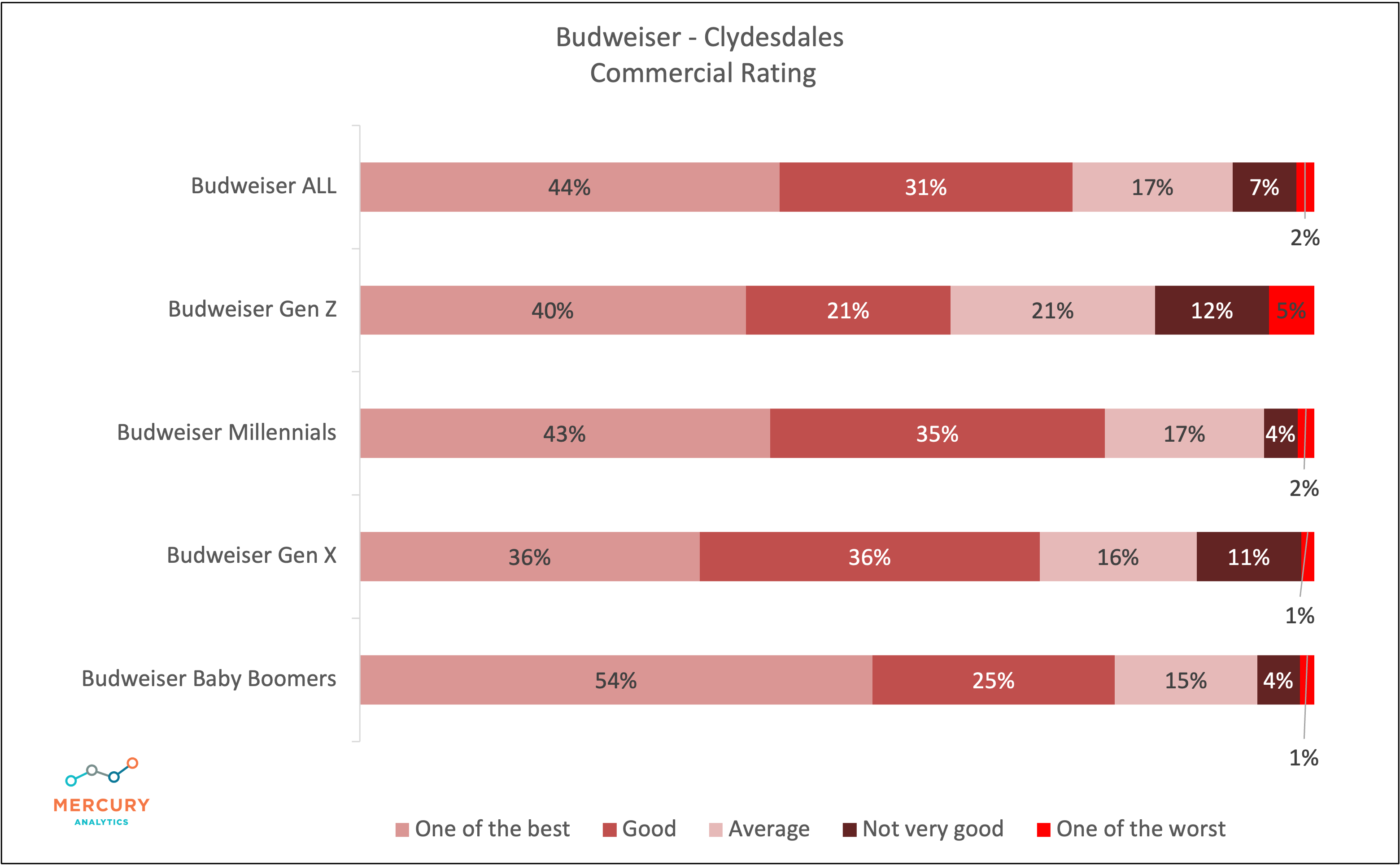 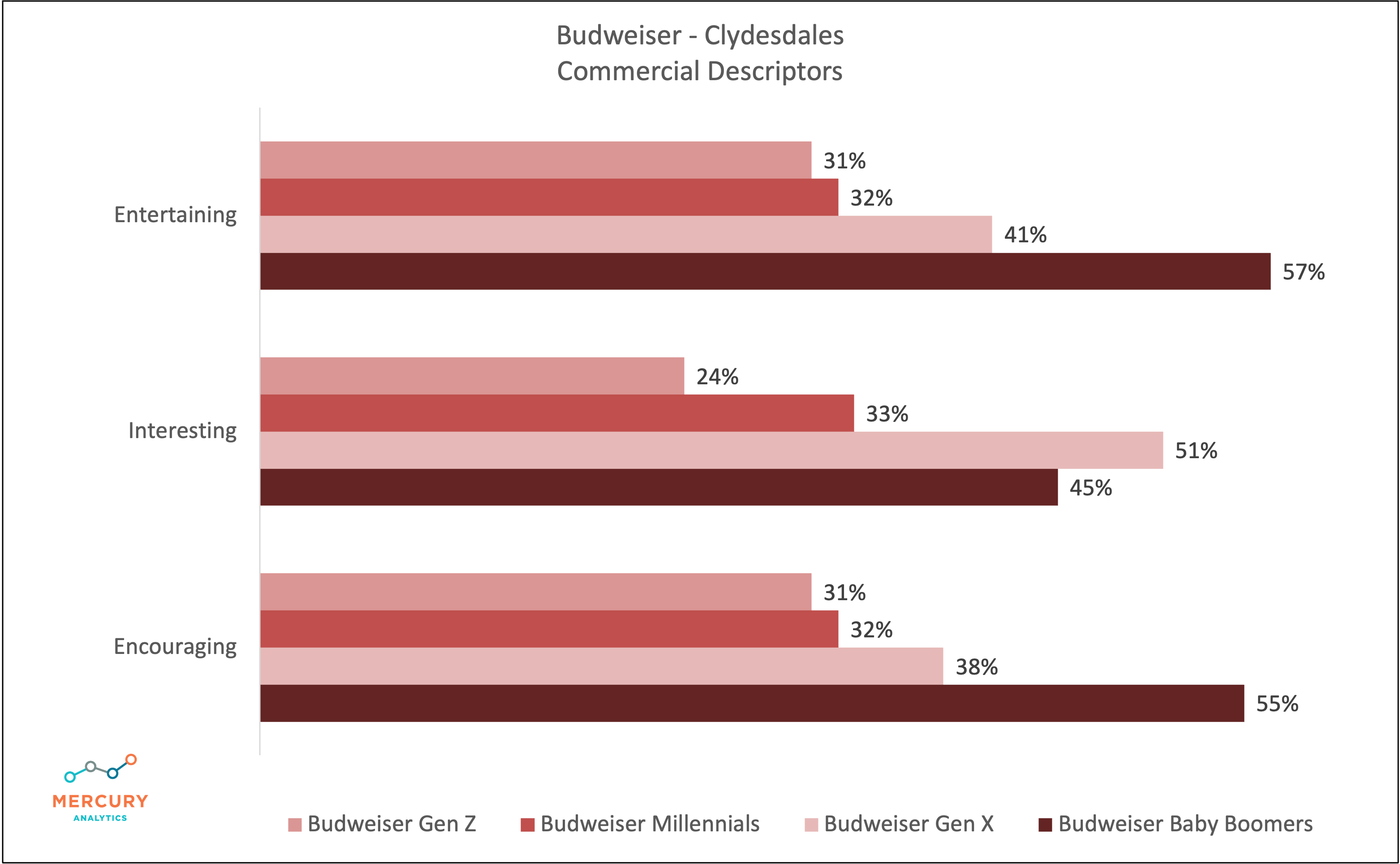 If there’s anything that we learned from this year’s ads, it’s that animals are a big draw for positive ratings.

Generation X ranked the ad the highest among all demographic groups, with Millennials next and Boomers and Gen Z ranking the lowest (and sometimes intersecting in opinion).

Chewy’s ad features two dogs who are waiting on a delivery, with demographic ratings across all groups peaking at 12 seconds when the larger dog has a revelation that deliveries coincide with a peanut butter treat. 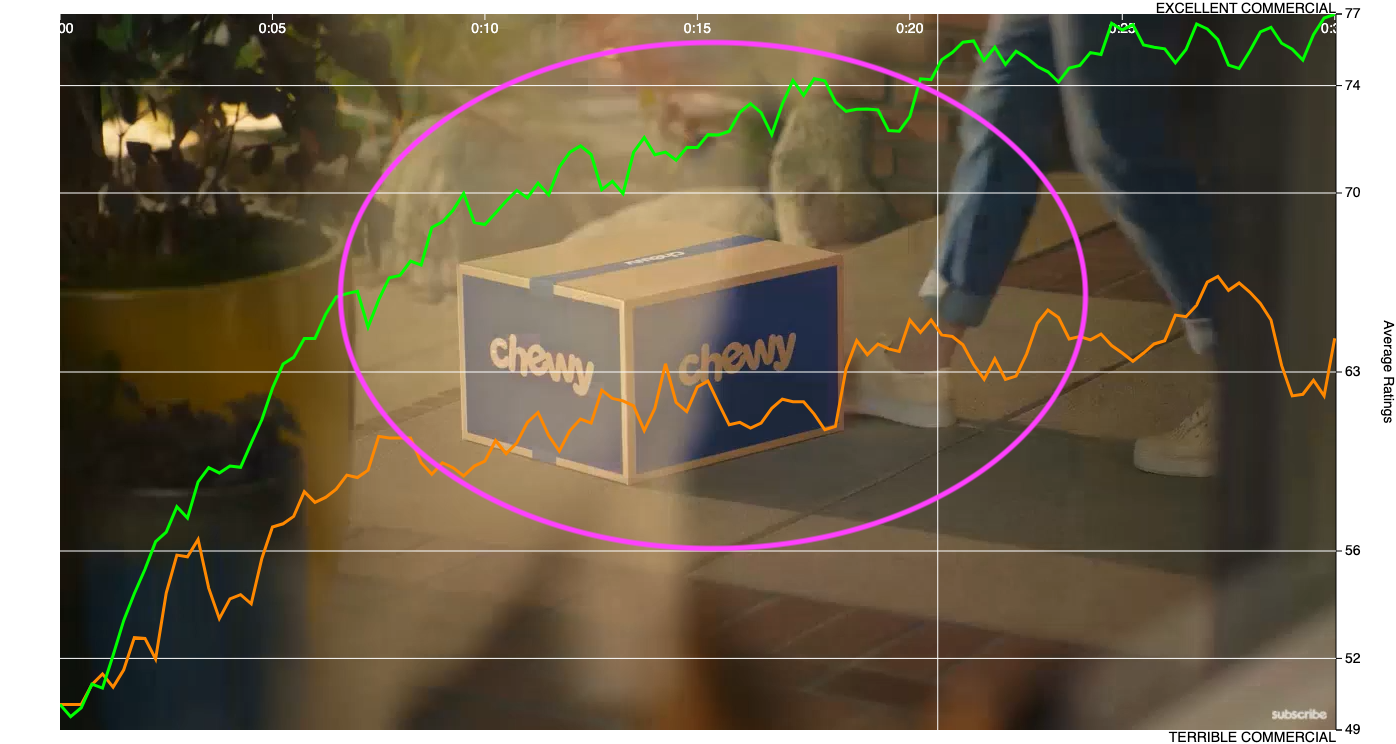 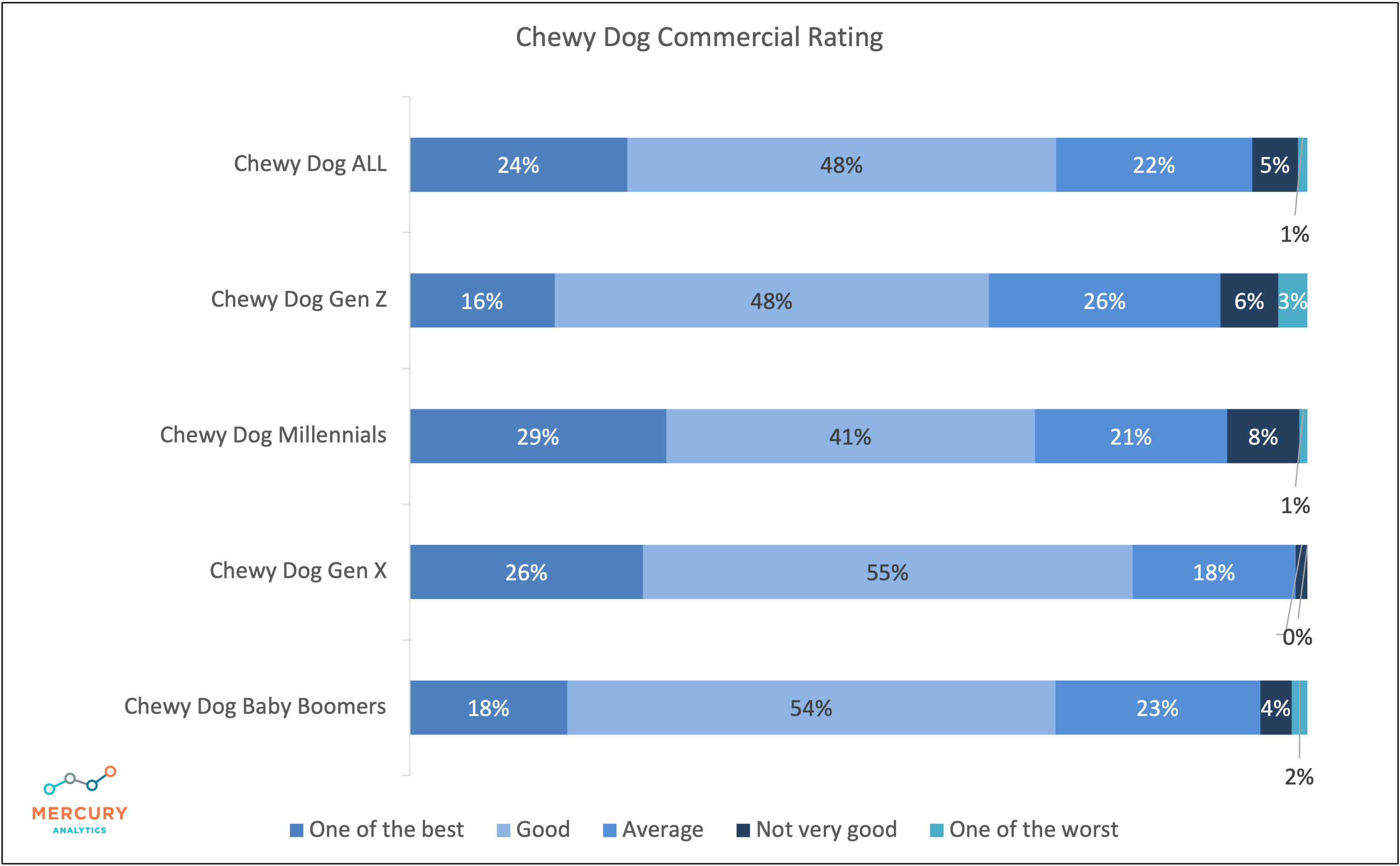 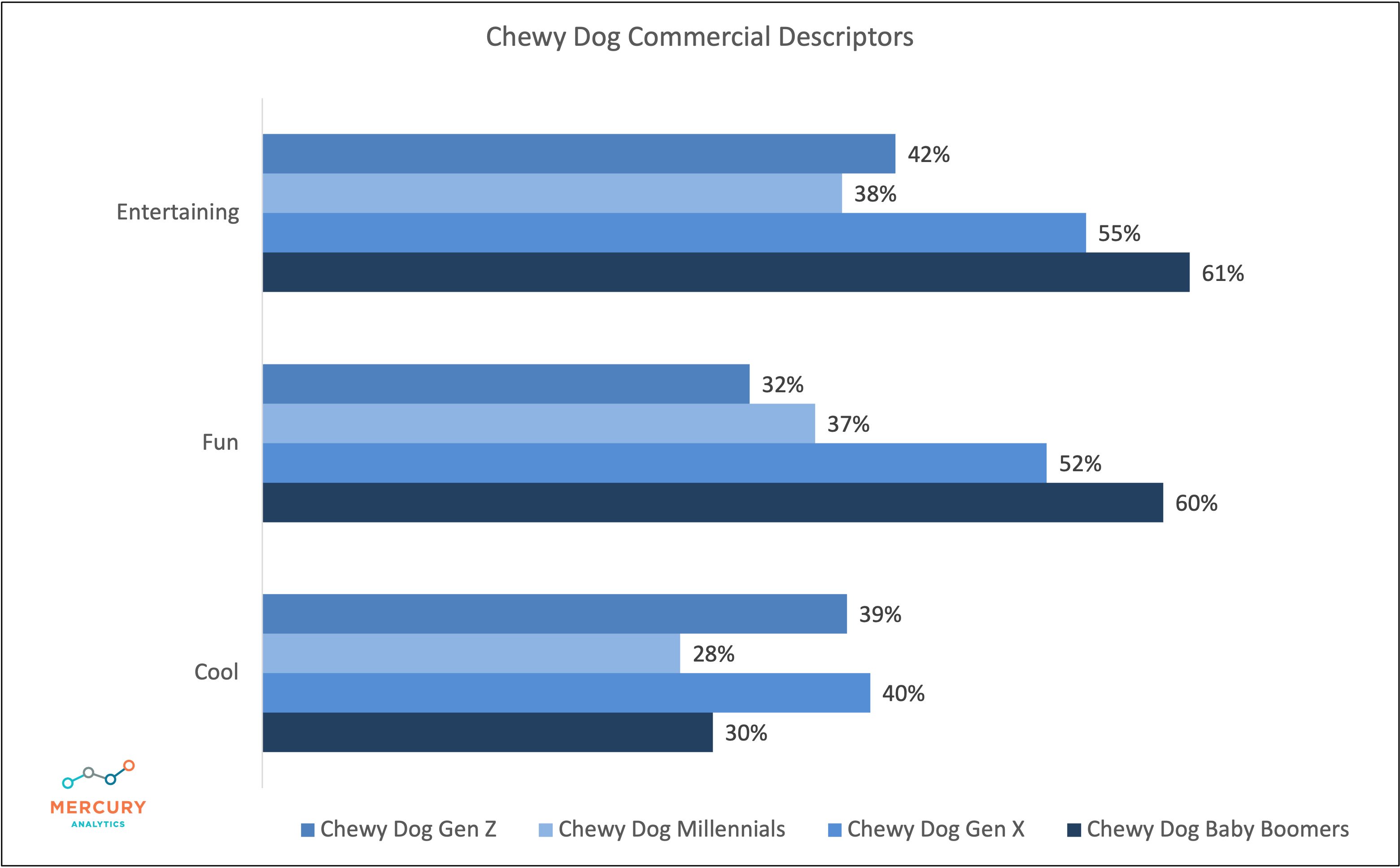 Ubereats: To Eat, or Not to Eat…

Boomers heavily disliked this advertisment, with many of them rating below 50% favorability. Unfortunately, the late night king couldn’t salvage ratings for Uber Eats. 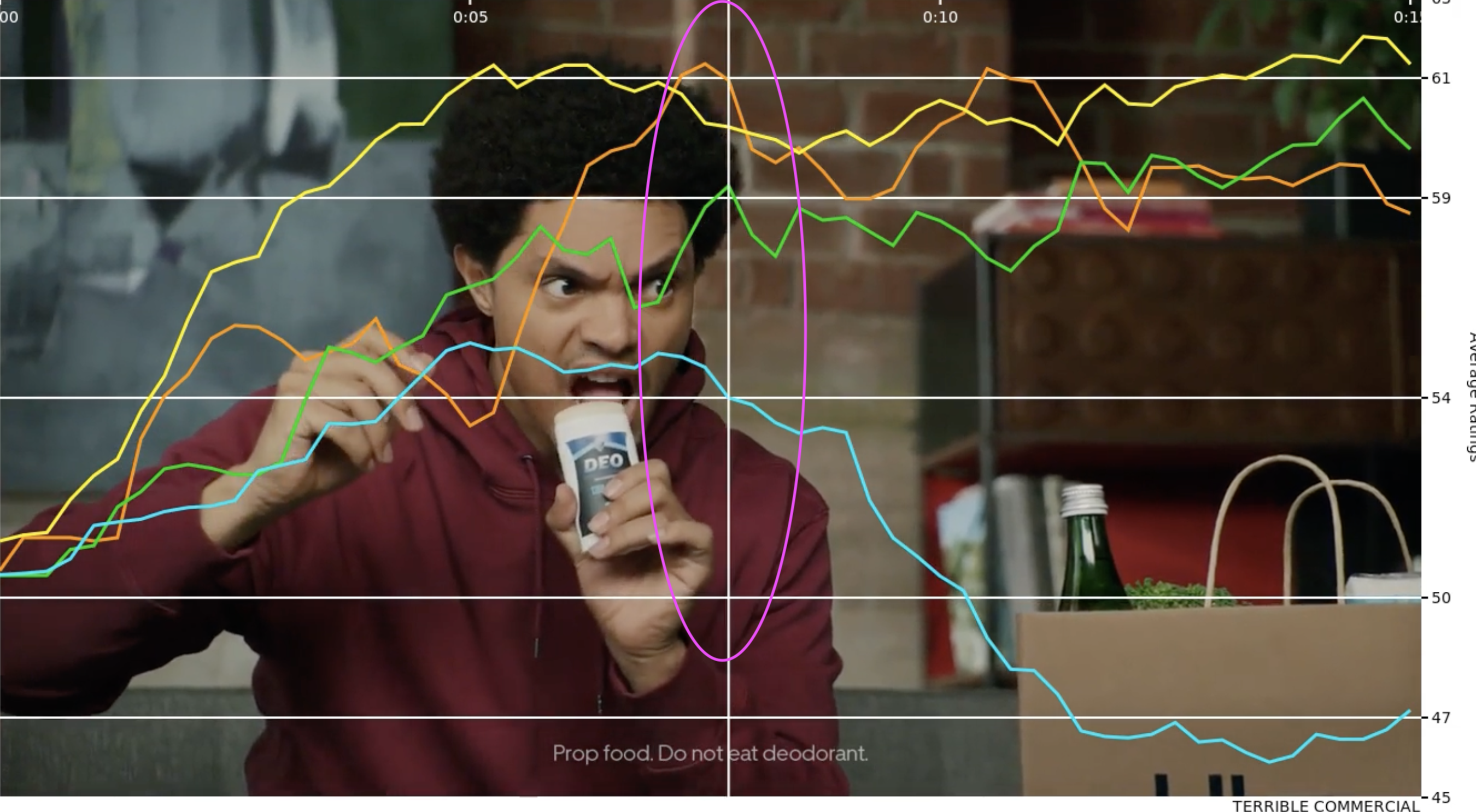 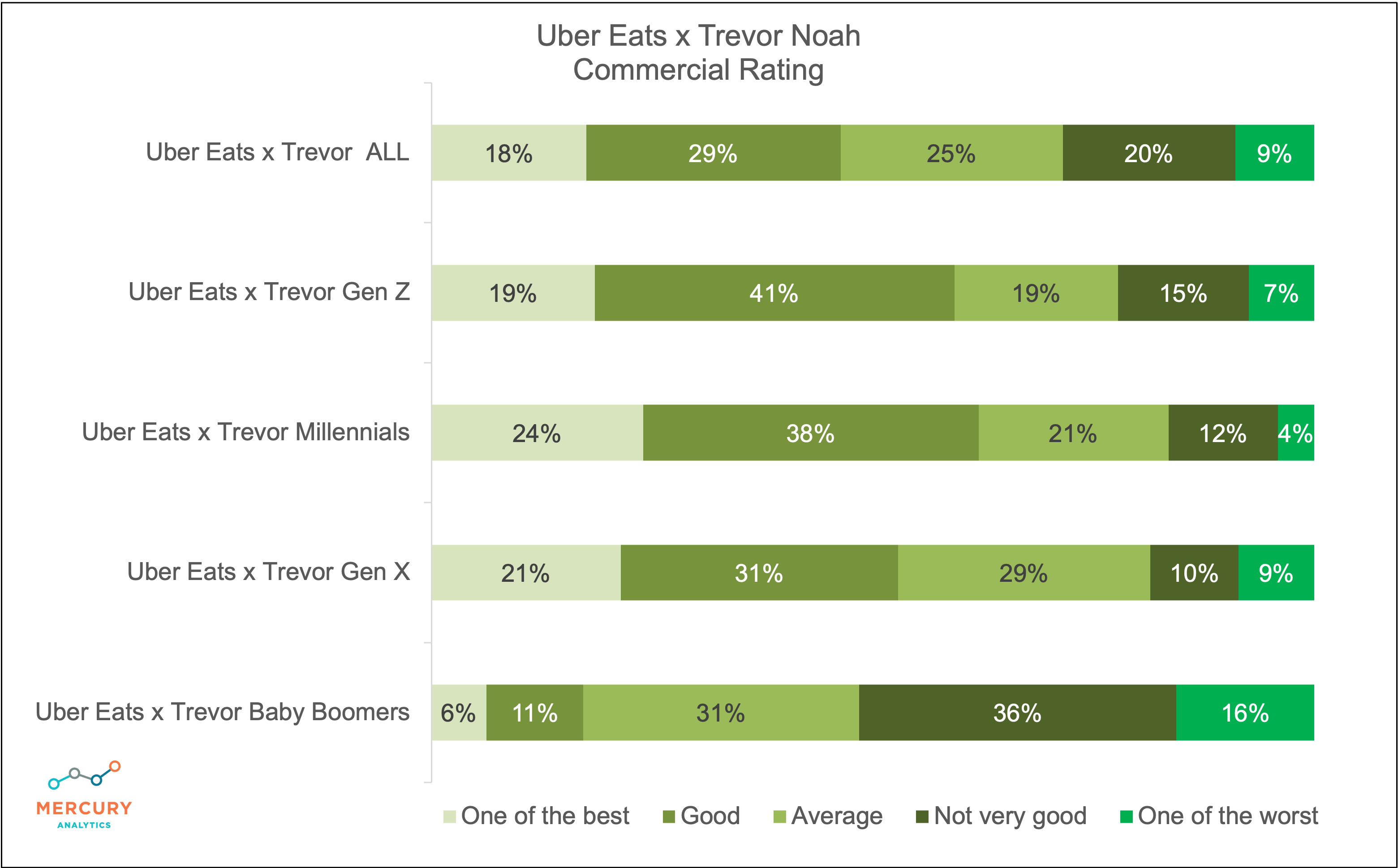 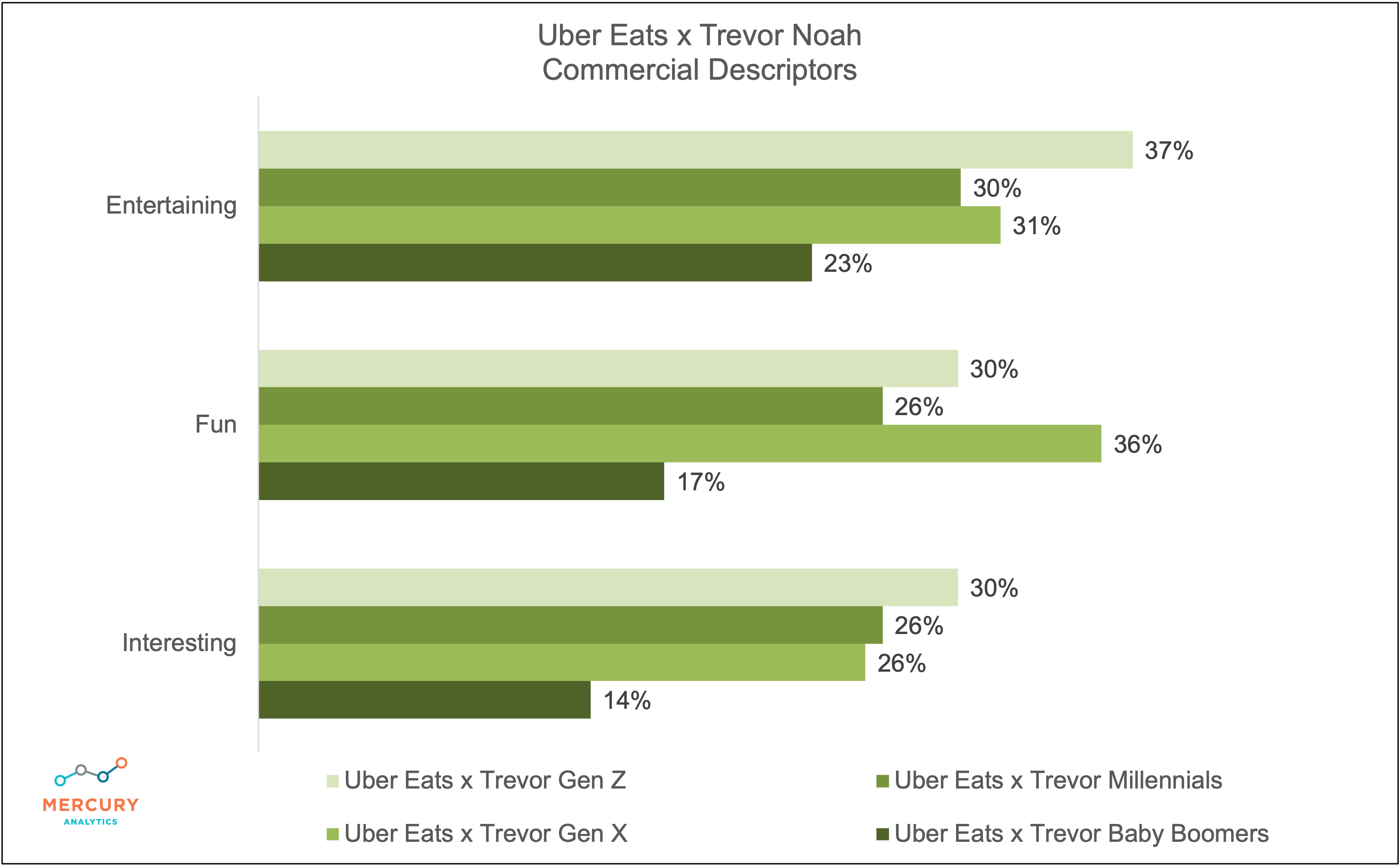 Gwenyth Paltrow, Oscar-winning actress and founder of health and wellness company GOOP, was popular with Gen X and Millennials in this advertisement as she alluded to the “funny” taste of her “special” candle sold under the name,  “This Smells Like My Vagina.”

Boomers, Millennials and Gen Z steadily grew in their favorability towards the advertisement as it went on, while Gen X’s favorability dropped sharply near the end of the ad. 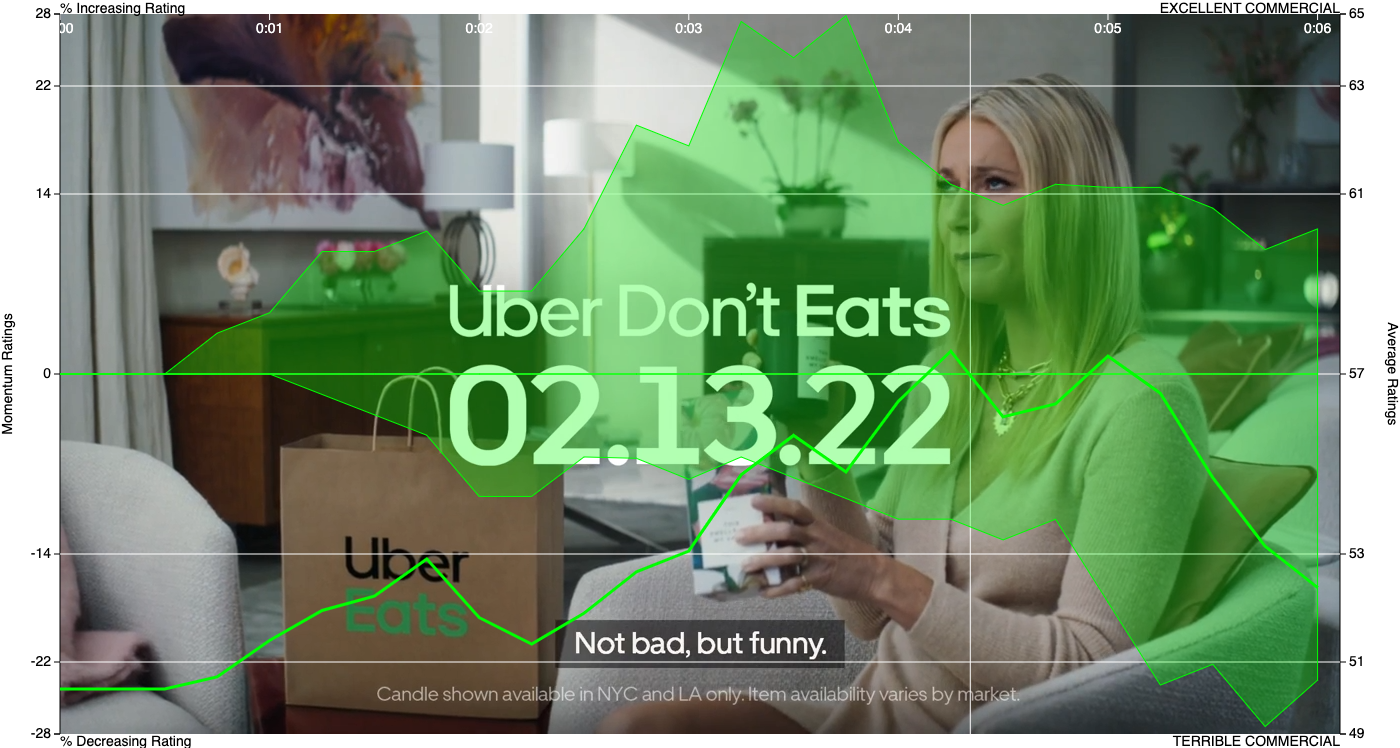 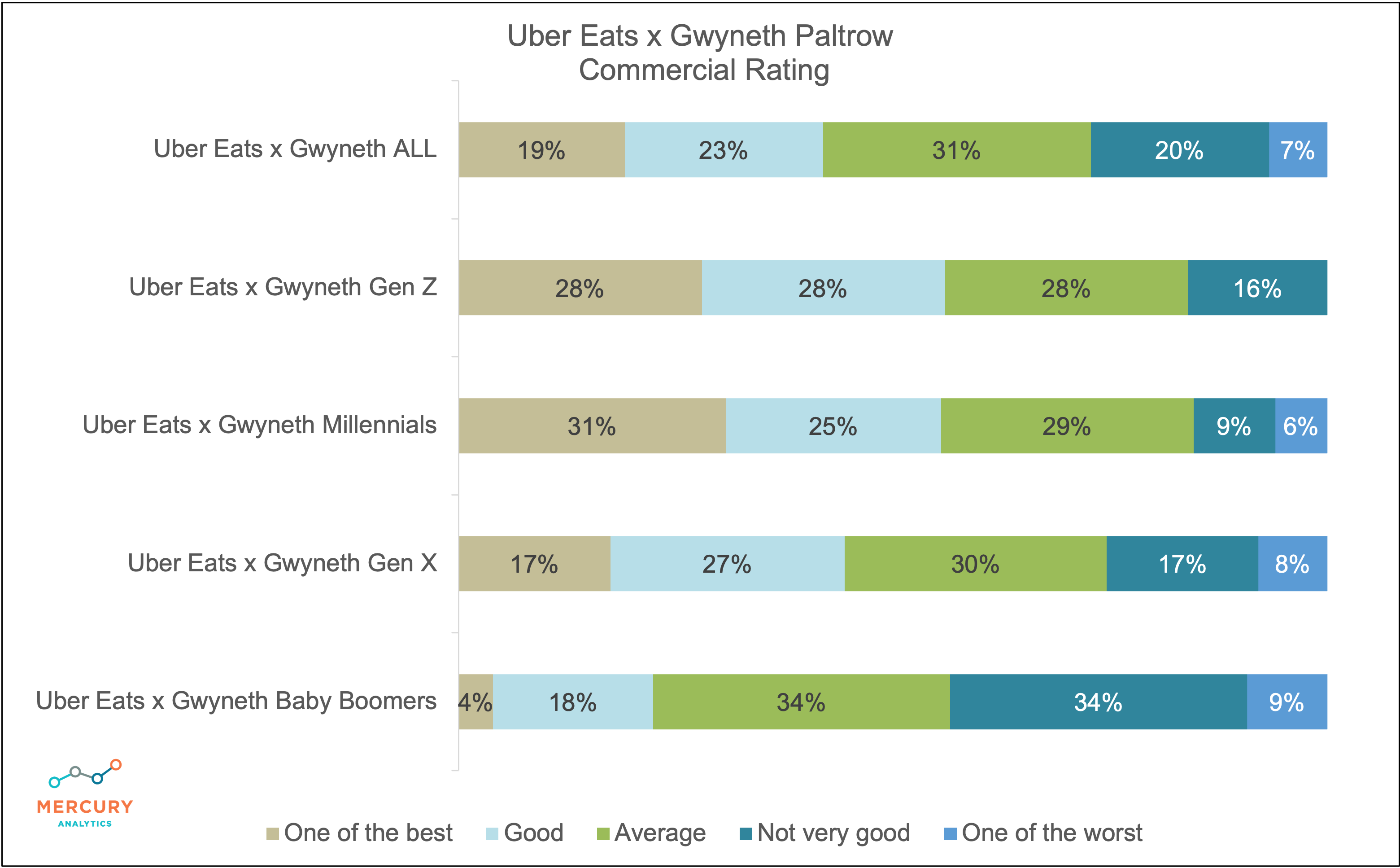 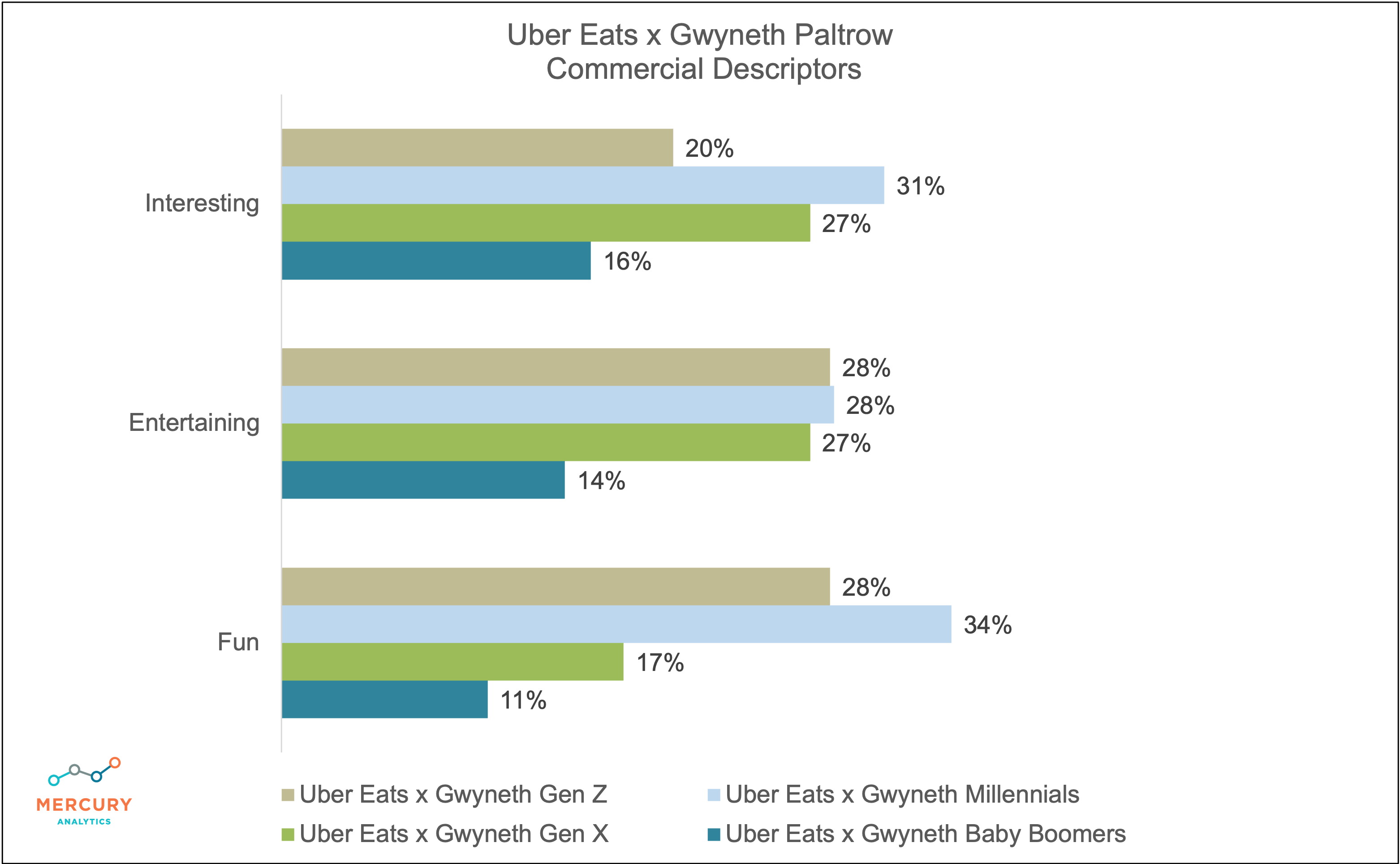 Ubereats: The Taste of Purple

Despite Jennifer Coolidge’s reputation as a fan favorite and the success of her show ‘White Lotus,’ this advertisement was poorly rated by our respondents.

Boomers rated this advertisement much lower than their Gen X counterparts, with huge gaps in favorability percentages between both groups. 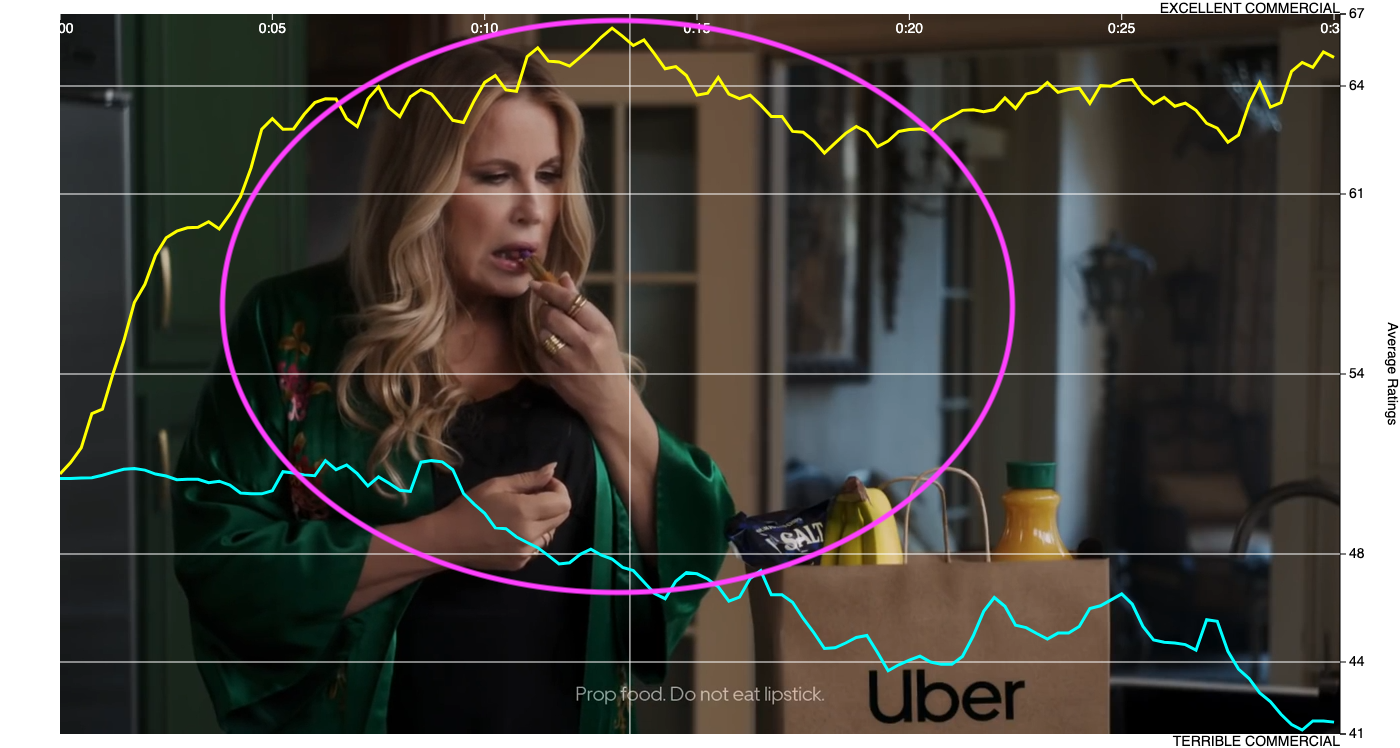 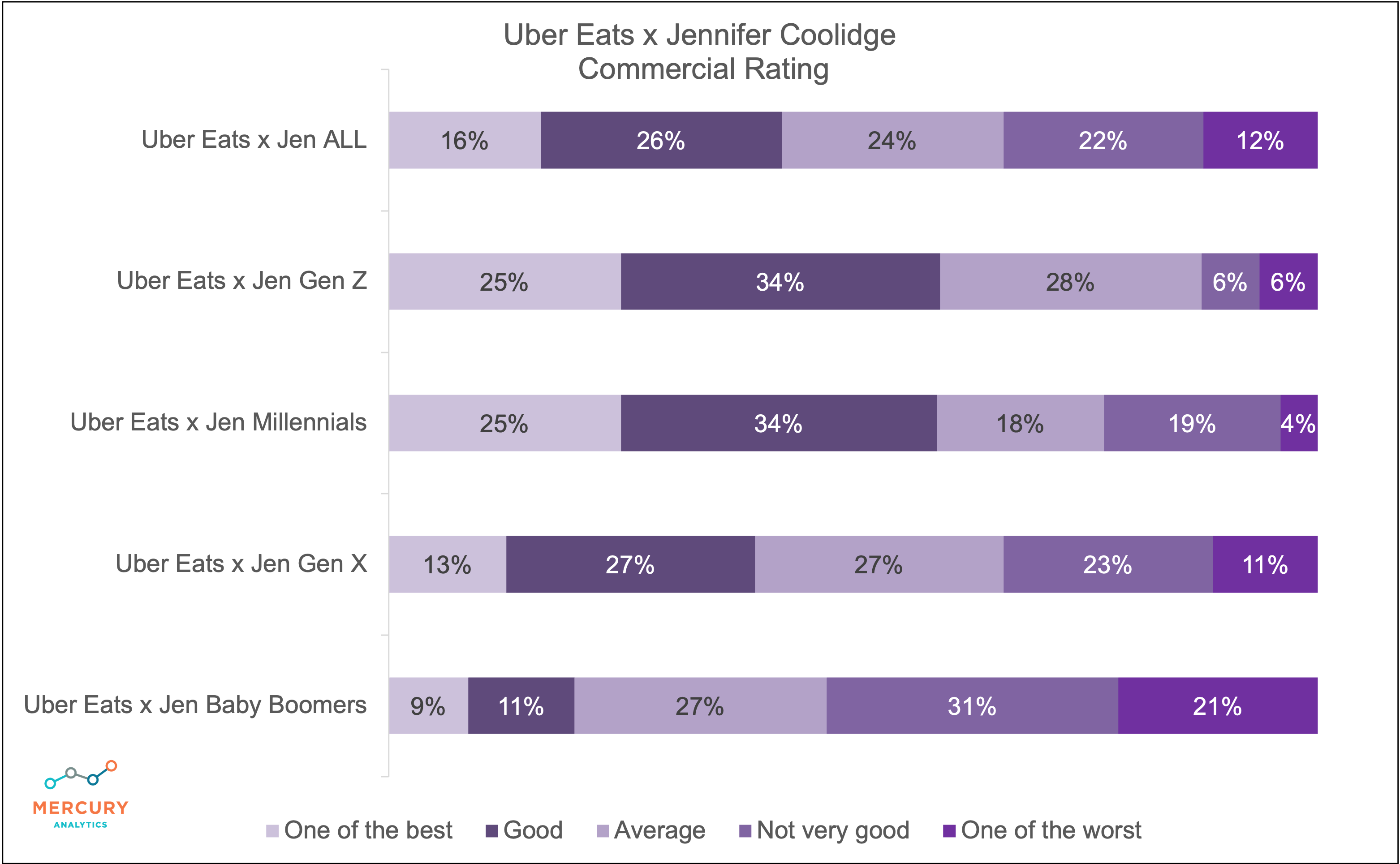 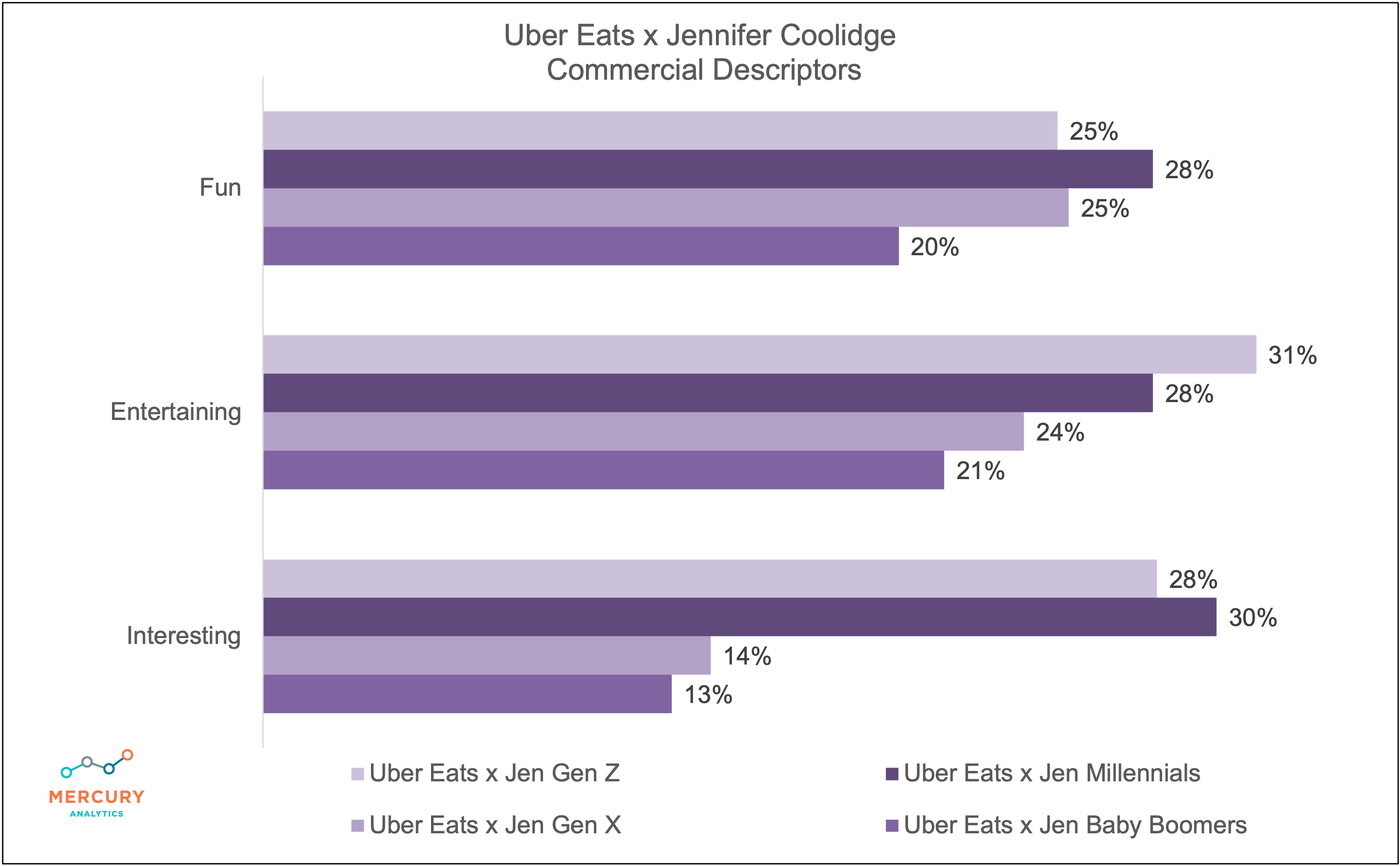 Mercury’s study tested the performance of these commercials among a national sample of n=1394 of US adults aged 18+ who indicated that they were ‘very’ or ‘somewhat’ likely to watch the Super Bowl this weekend. Additional quotas were set to ensure the sample was representative of age, gender, and ethnicity demographic breakdowns in the US.

Respondents were first asked a series of demographic questions followed by questions to help understand respondents’ TV consumption patterns and likelihood to watch the Super Bowl. Next, respondents were each shown four out of fifteen commercials and asked to rate their feelings about them on a moment-to-moment basis. Each video was randomly-assigned, and each set of commercials was shown in random order to eliminate any biases resulting from viewing order.

Between watching each commercial, respondents were asked post-exposure questions to assess their opinions of the commercial and brand.