The format for the final debate called for six 15-minute time segments dedicated to topics announced in advance in order to encourage deep discussion of the leading issues facing the country.

Mercury’s study tested the candidates’ performance among a national sample of n=1125 likely voters. Respondents were first asked a series of demographic questions followed by questions to help understand respondents’ current views on politics in America, and specifically on President Trump and Democratic Presidential candidate, Joe Biden.  Respondents were next shown one of six video clips from the debate featuring one of the 15-minute debate segments.

Before the close of the survey, respondents were asked post-exposure questions to again assess their views on politics in the U.S., and to understand their views surrounding the COVID-19 Pandemic response.

A Better Debate for America

The final presidential debate provided America with the ability to actually hear equally from both candidates, in contrast to the last debate in which Donald Trump relentlessly interrupted Joe Biden.  As a result, the stark differences between the candidates was on display.

Joe Biden recorded the strongest ratings among Democrats in the sections related to National Security (92%), Climate Change (92%) and Race in America (91%), with negative ratings among Democrats never exceeding 7%. Among Independents, Joe Biden’s strongest ratings were provided in the sections related to Race in America (58%), American Families (52%) and Climate Change (51%), and in no section did he receive negative ratings greater than 30% or was the difference between positive and negative ratings less than +20% positive.

Donald Trump’s strongest ratings among Republicans were recorded in the sections related to Leadership (92%), National Security (88%), and American Families (86%), while in no section did his negative ratings exceed 10%. Among Independents, Donald Trump’s strongest sections were related to Leadership (62%), American Families (48%), and COVID-19 (42%). However, among Independents, when discussing Race in America and National Security, Donald Trump’s positive versus negative ratings were within 2% meaning Independents were split on these issues and his responses. On the issue of Climate Change, negatives outweighed positive ratings 27%/43%.

Donald Trump’s support has remained largely unchanged since the first presidential debate among Republicans (84% versus 85%) and Democrats (5% versus 6%), but has fallen among Independents (40% versus 35%).

Since the last presidential debate 3+ weeks ago, Joe Biden’s support has largely increased among Independents and previously undecided voters. While last night’s debate presented a much more ‘in-control’ Donald Trump, it is his positions on issues and aggressive style that are the key elements that turn off Independent and undecided voters.  Joe Biden’s performance, while occasionally lacking energy and clarity, also contained moments of great strength, compassion, and substance — characteristics that connect Joe Biden to undecided voters.

There were no knock-out punches, no terrible gaffs, and there was no run-away winner.  Joe Biden has the lead, but events over the next 12 days and turn-out will decide the election.

Who DID Better in Each Segment

Q: Overall, who would you say did better in this video?
(Average calculated across six segments, ‘much’ or ‘somewhat’ better per candidate)

Q: Overall, how would you rate Donald Trump’s / Joe Biden’s performance in this video?
(Averages calculated across six segments)

How Americans Feel After the Town Halls 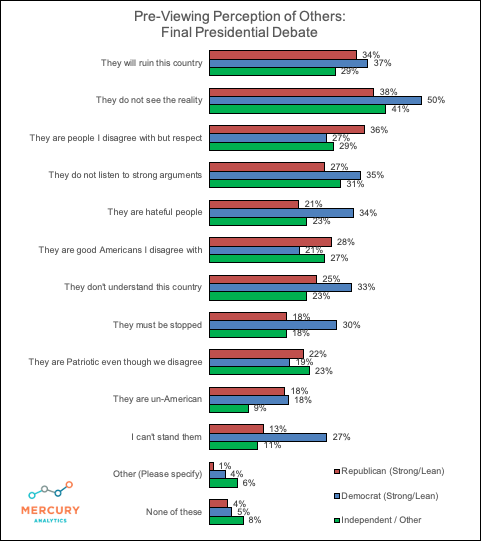 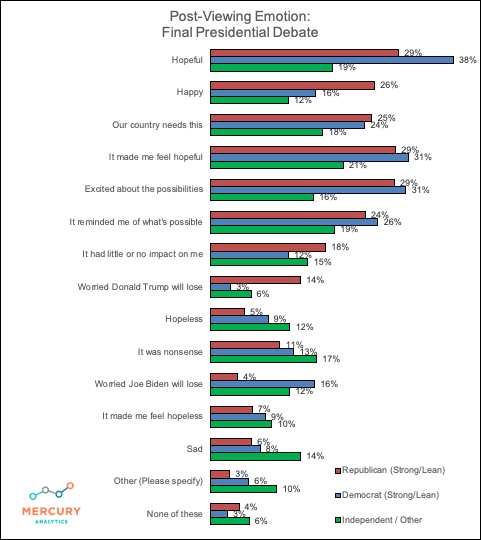 * While shifts appear stronger for Donald Trump, based on the relative size of each segment, the overall average is approximate 4% for each candidate. 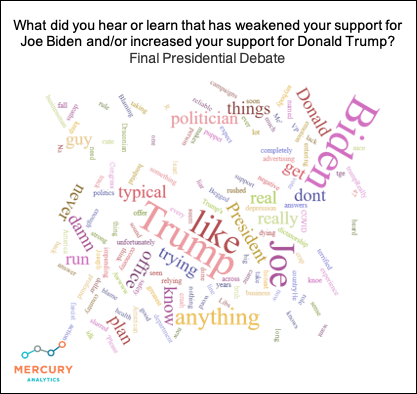 *Among respondents whose support for Trump increased after watching the video. 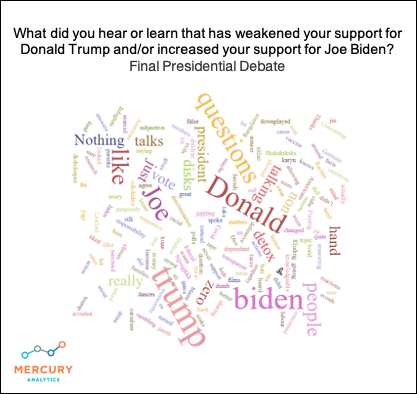 *Among respondents whose support for Biden increased after watching the video.

Before concluding the survey, respondents were asked a series of questions to assess how they feel about masks, social distancing, and President Trump’s overall handling of the pandemic.