On October 7th, 2020, the vice presidential debate between Mike Pence and Kamala Harris took place at the University of Utah in Salt Lake City.

Mercury Analytics conducted an overnight survey including dial-tests of the vice presidential debate between Vice President Mike Pence and Senator Kamala Harris, which took place on October 7th, 2020 at the University of Utah in Salt Lake City.

The format for the vice presidential debate called for nine 10-minute segments, although the flow of the debate shifted to 8 defined segments.  Each segment was dedicated to topics chosen by the moderator, Susan Page, the Washington bureau chief of USA Today. The moderator asked an opening question, after which each candidate had two minutes to respond and the balance of the time in the segment was used for a deeper discussion of the topic.

Before the close of the survey, respondents were asked post-exposure questions to again assess their views on politics in the U.S.

The debate between Mike Pence and Kamala Harris took on much greater significance because of the age of both Presidential candidates as well as Donald Trump’s very recent infection with COVID-19. Unlike the first Presidential debate, both candidates generally adhered to the allotted time slots to speak and did not interrupt each other frequently, showing much greater respect for one another. And while neither candidate generally answered the question that was asked, America got to see Mike Pence unfiltered and on his own, and got to meet Kamala Harris, a first for many.

On nearly every metric, Kamala Harris won the debate (see charts below).

Click on any of the segments listed on the top of this page to see in detail the ratings of each segment of the debate to identify those that were the strongest for a candidate and those that were weakest.

Also critical, the survey asked several specific questions that measured whether Donald Trump should handle recommended safety procedures any differently because of the pandemic.

While a majority of Republicans feel that Donald Trump should continue to have rallies despite attendees not taking recommended safety precautions, the vast majority of all Americans think Donald Trump’s behavior towards the pandemic should change to embrace the basic safety guidelines provided by the CDC. Despite these views, when asked to rate Donald Trump’s response to the pandemic, 75% of Republicans give him “Excellent or Good” ratings, versus only 15% of Democrats and 29% of Independents.

With respect to the pandemic, Donald Trump faces a moment when Republicans, while supporting his actions until now, also feel that his behavior needs to change.  Whether it will remains to be seen.

Who Did Better Overall

Q: Overall, who would you say did better in this video?
(Average calculated across nine segments, ‘much’ or ‘somewhat’ better per candidate)

Q: Overall, how would you rate Mike Pence’s / Kamala Harris’ performance in this video?
(Averages calculated across nine segments)

How Americans Feel After the DEBATE 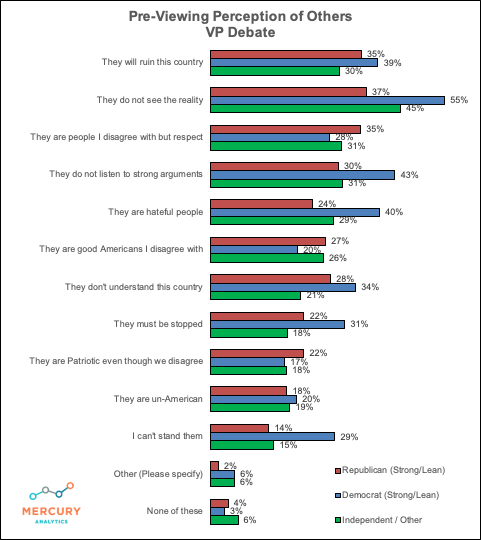 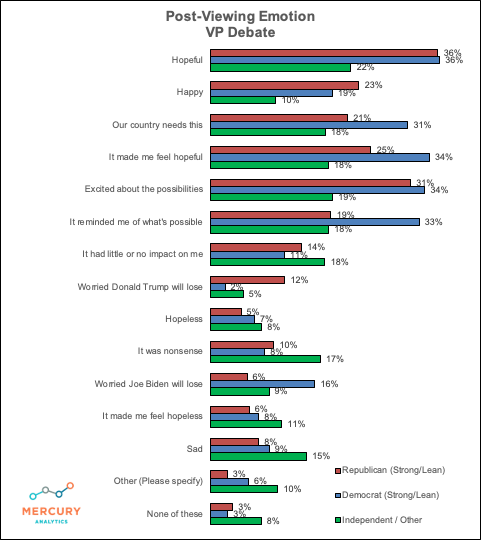 Before concluding the survey, respondents were reminded that last Friday, October 2nd, it was announced that President Trump had contracted COVID-19 and was admitted to Walter Reed hospital for treatment. They were then asked a series of questions to assess how they feel about masks, social distancing, and President Trump’s overall handling of the pandemic.