The format for the first debate called for six 15-minute time segments dedicated to topics announced in advance in order to encourage deep discussion of the leading issues facing the country.

Chris Wallace, moderator of the first 2020 presidential debate, selected the following six topics for each segment: The Trump and Biden Records, The Supreme Court, Covid-19, The Economy, Race and Violence in our Cities, and The Integrity of the Election

Mercury’s study tested the candidates’ performance among a national sample of n=1050 likely voters. Respondents were first asked a series of demographic questions followed by questions to help understand respondents’ current views on politics in America, and specifically on President Trump and Democratic Presidential candidate, Joe Biden.  Respondents were next shown one of six video clips from the debate featuring one of the 15-minute debate segments.

Before the close of the survey, respondents were asked post-exposure questions to again assess their views on politics in the U.S.

It was clear from the start of the debate that Donald Trump had no intention of thoughtfully discussing issues, of following agreed upon debate rules, or treating his opponent with respect. What he brought was a relentless series of mean-spirited attacks, filled with unsupported statements, misrepresentations, and angry bluster. While Joe Biden tried to present ideas, Trump’s constant attacks and personal insults made any substantive exchanges impossible, leaving Mr. Biden largely unable to answer, sometimes exasperated, sometimes angry.

Mercury’s research shows that Donald Trump’s behavior did not expand his base in any way, while Joe Biden’s adequate performance combined with Donald Trump’s argumentative, aggressive bullying and interruptions increased Biden support among ‘persuadables’, away from Trump.

Key Takeaways From the Debate:

Watch a compilation of a few moments of Donald Trump’s behavior.

Who DID Better in Each Segment

Q: Overall, who would you say did better in this video?
(Average calculated across six segments, ‘much’ or ‘somewhat’ better per candidate)

Q: Overall, how would you rate Donald Trump’s / Joe Biden’s performance in this video?
(Averages calculated across six segments) 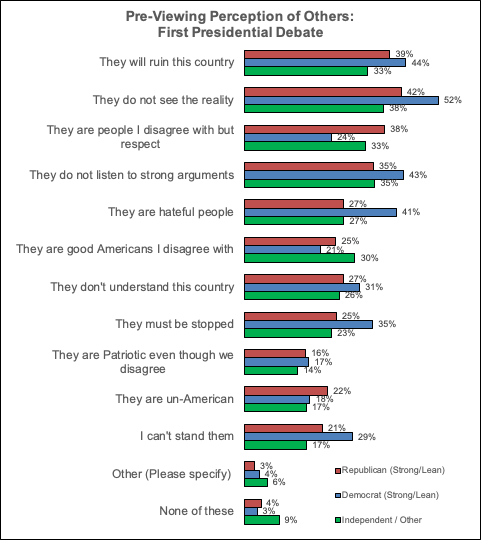 How Americans Feel After Viewing the DEBATE 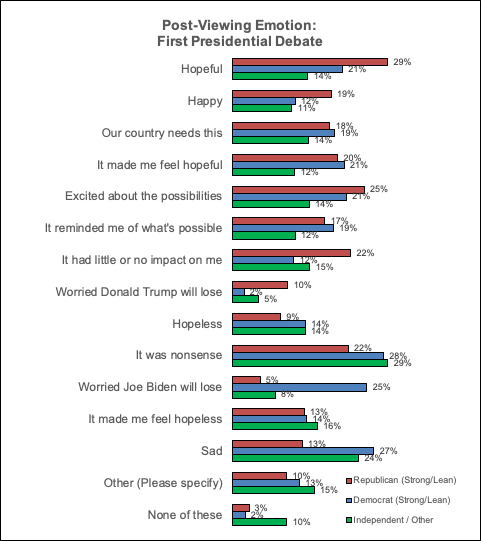